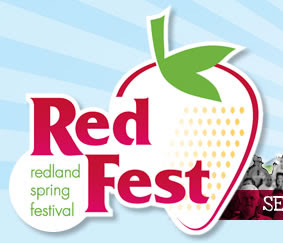 THE changing of the guard in nature's march toward the winter always makes me sad. While the door's open during a warm farewell to the great friend called Summer, some chilly old relatives, Aunty Autumn and Uncle Winter, sneak past and unpack their suitcases for an extended stay. The promise of springtime glory may be the only way to handle the suffering of the months ahead. I am not alone in already thinking about spring 2011 in Redland City; it creates some top-of-mind issues for the band of volunteers who now start the countdown to the city's annual spring festival. Their excitement will build quickly after the annual general meeting of Redland Spring Festival Inc at Cleveland Showgrounds at 6.30pm on Tuesday, March 15.
JOANNE Millard, in her second year as festival manager, is confident this year's festival will be the best in the event's 53-year history. Now also carrying the modernised tag as "Redfest", the spring festival started as the Redlands Strawberry Festival. Joanne says 18,000 people enjoyed the festival program over its two and half days last spring. The size and diversity of the festival, including art, music, a multitude of displays, a wide range of food and an acclaimed children's carnival, creates a lot of work for an army of about 300 volunteers. At the head of the structure is a committee, which will be up for election at the AGM. Joanne says the committee has 10 to 12 members, who typically reflect sectors of community involvement such as arts, entertainment. She says president Bruce Smith has nominated for another term; one of Bruce's achievements was to enlist Olympians to feature at the 2010 festival, and more such VIP guests are on the cards for 2011.
"THE reason for the festival is to benefit the community and it is a constant challenge to raise the funds to hold it," Joanne says. "We get support from sponsors and grants because the gate takings do not cover the costs. "At some stage in the past the council ran the festival, and many people believe this is still the case, but it has long been independently run." Joanne, a stained glass artist, has lived in Redland for the past 10 years after she migrated from New Zealand in 1979 and lived in Western Australia and New South Wales on her way to Queensland. She says she festival is a great showpiece for the wonderful city that is now her home. Mark your calendar: The festival dates are September 9-11. Anyone wanting to contribute is welcome at the AGM. Readers can check at www.redfest.com.au for updates.

Thanks for joining me to meet the great people in the marvellous community of classified advertising. This column has appeared in The Redland Times.
Posted by John Rumney at 7:09 pm