THE sporting equivalent of a jackpot lands under the noses of team coaches from time to time.
The special prize in any code is a team that has the essential common spirit bonding the individuals into trophy-winning combinations.
Sometimes groups of mates rise through the junior ranks to senior level, sharing their common interest for so long the teamwork comes naturally.
The result can be a formidable force that meets its opposition with instinctive co-operation.

A TELEVISION documentary this week showed scientists measuring the brain patterns of players as they develop the empathy of teamwork.
However, plumber Vinnie Yates didn't need a brain scan to measure anything when he rejoined Cleveland Thornlands Cricket Club in 2008 after a break of a few years.
Vinnie had played with the Cougars since the under-12s, and he says the highlight of his homecoming to the senior side was taking the field his old mates.
He now looks forward to the new season with training to start in mid-August.
Vinnie says the club, based in Fitzroy St, Cleveland, and fielding teams from under-10s to senior, has been going well since it joined the Queensland Sub Districts Cricket Association five years ago.

PLAYERS are keen to hear all the administrative facts, figures and visions for the future at the annual general meeting on Wednesday, July 18, an event that has featured this week in our Public Notices.
The senior side, with Vinnie as captain, ended the last season sixth in an eight-team draw in its first campaign in the subdistrict A2 grade, after an A3 minor premiership the previous season.
He says 2011-12 was "not the best season we've had" but nevertheless the highlights included the performance of Matt Elliott, who won the club's bowling and senior player of the year awards; Matt formerly played with the Birkdale Muddies and was in his first season with the Cougars. Vinnie expects to start training for the competition start in September with a senior squad of about 15.

HE says the club's turf wicket and the 75-over match format across two Saturdays are drawcards.
"It's an all-turf competition – that's one of the biggest pluses, and having the matchs across two weekends gives everyone the opportunity to play as we can substitute for players who are not available on both days," he says.
The club gets straight to the heart of team spirit in its recruitment for the new season, aiming for any "old CTCC player" who would like to return to the club or "new players" looking to be involved.
Rest assured, no brain scan is on the agenda.

Posted by John Rumney at 9:53 am No comments:

Winter in Whitsundays just a memory during southern cold snap

SIX glorious winters in the relative warmth of the Whitsundays have failed to make Louise McDougal intolerant of the southern chill.
Since February Louise, her husband Ross and their teenagers Connor and Sarah have been settling into a different lifestyle on the Redland City bayside.
But this week's cold snap has not dampened their enthusiasm as they prepare to move to their new house at Cleveland after renting a unit until the purchase was finalised.

THE family has already had experience in colder winters, as they hailed from the NSW Far South Coast before their long stay on Hamilton Island.
Louise says she grew up in the Redlands and actually enjoys a little winter chill. Nevertheless, Moreton Bay is a long way from the white sand of Whitsunday Island's famous Whitehaven Beach where happy days with friends and family have given Louise some her fondest memories of life in the Whitsundays.
She says scuba diving on the Great Barrier Reef and snorkelling with humpback whales were other highlights of recent years.
"Ross and I have worked in the diving industry most of our lives," she said yesterday. "The schooling on Hamilton Island wasn't suitable for teenagers like Sarah and Connor so we decided it was time to get them back to the real world."

WITH the two students now at Cleveland High School and Ross working as a skipper on the Stradbroke Island waterbuses and engineer on the barges, Louise looked for her own niche.
She is the face behind the notice headed "Dog Walking Service" in the Pets & Pet Supplies column.
"I have always loved dogs and I guess the idea came up because we couldn't have a dog during our time on the island," she says.
A cute little cavoodle ڏ– that's a cross between a cavalier spaniel and a poodle – has been Louise's first client, having walks while his owner works.
He's not quite the dimensions of Louise's favourite breeds. She has tended toward bigger creatures – labrador, a golden retriever and a labradoodle.
The family had to find a foster home for their labradoodle, Monty, before they moved to Hamilton.

LOUISE tells how the dog jumped a 2.5-metre fence when she called his name as they approached his new home during a holiday about two years after they had headed north.
"People say a dog will forget their old owners but I don't think they ever do," she says.
Louise has a great slogan for her walking service: A happy pooch is a happy house. So the pitter patter of paws will soon echo around the McDougals' new address.

Thanks for joining me in the marvellous community of classified advertising. This column has appeared in The Redland Times.
Posted by John Rumney at 9:08 pm No comments: 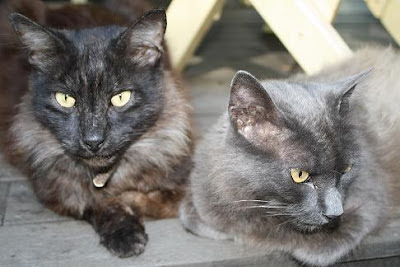 Image: This duo has nothing to do with the cats in the story but they are in fact my family's cats and the picture was too nice to leave hidden in the archives.

FOUR years have passed since a lovely little story about a man, a mother cat and her cute newborn kittens graced the news pages of The Redland Times. Today, here's chapter two:

ENGINEER Richard Cooke had to cut into a Capalaba factory wall to extract the feline family, after the stray cat he had been feeding found the safest spot for her nursery. Richard still has the tabby mother as his 'factory cat', while two of her offspring keep Richard and his wife Loren company at their Thornlands home. Some intense cat politics has ruled at Thornlands in recent weeks, however, since a handsome black desexed male arrived as a guest.

THE two tabbies with a family history of 'doing it tough' don't appreciate other paws on their patch. Loren has had to juggle some animal instincts with diplomacy to ensure the claws don't come out. She has fallen in love with the guest and calls him Onyx. But the tabbies are getting testy; her search for Onyx's owner is getting desperate.

"HE was wandering the neighbourhood for four weeks before my neighbour caught him in a trap; she was on her way to the pound with him but he's such a beautiful, beautiful cat; I said I would look after him and try to locate his owner," Loren says. "Even when he was in the trap you could put your fingers through the wires and stroke him."

THREE weeks later and after advertising widely, Loren is wondering when and how this cat tale will end. She says she has spent more than $200 on Onyx, who now has a microchip because Loren was worried that he might escape again. "The vet reckons he's been through a hell of a time; he's between two and four years old but probably closer to two, and he might not have lasted much longer fending for himself," Loren says. "It seems he was only just surviving around the creek near our home and raiding the garbage; his fur was matted and mud was stuck to him. He's still skin and bones but he's recovering and he's fluffing up nicely."

LOREN has seen heartbreak during her hunt for the owner: "A poor woman came all the way from Forest Lake hoping he was her cat. She was in tears because he looked so much like hers. I suggested that she could adopt him but she said her children loved their missing cat too much to present them with another."