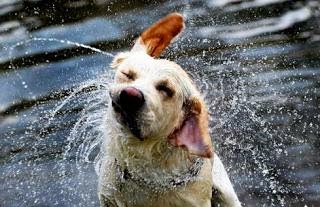 A CARING Redland woman known as "Deb the dog lady" is on a special mission this summer – helping the city's suffering canine population. With her beloved terrier Yoda at her side, Deb Humphreys is in action across the city's suburbs, offering a cool bath and a comforting groom for overheated dogs. Deb's recent notice asking "Is your dog hot?" heralded the 2014 Queensland heat wave – and caught the eye of new and existing customers. The proprietor of a one-woman business, Creature Comfort, was delighted with the response. "I worked in marketing some years ago and I like playing around with words, I guess," Deb says. "I tried to think outside the square, and this time it has worked."
-
WEST Australian-born Deb, who has lived in the Redlands for 14 years and is about to move to Thornlands, says she found the perfect job when she bought Creature Comfort about six years ago. "I come from a long line of dog whisperers in the family and I love doing what I do," she says. "I sometimes wonder if I'm starting to smell like a dog as they'll come straight up to me in the street, sniffing and with their tails wagging." Deb says Yoda, a Jack Russell-Chihuahua cross, is a good offsider when she arrives at each address during her Operation Hot Dog: Some 'dog diplomacy' helps to put the clients as well as the pets at ease. Three panting Maltese terriers have been among the beneficiaries of the Deb and Yoda show this week. She says the owner had been worried about the dogs, which were overdue for a service, and the ad's message was timely.
-
AS the forecasters predicted the current heat wave, the Queensland RSPCA early this month warned pet owners about the dangers of heat stress to their animals, saying a dog can die in just six minutes if left in a car as the mercury soars. Seeing Eye Dogs Australia reinforces this message and advises: Give your dog has access to plenty of fresh clean water; keep the dog out of the sun as much as possible; the dog will probably prefer to lie on tiles rather than on carpet or its bed; damp towels for the dog to lie on can help; the dog may enjoy a fine spray with the hose and/or a wipe off with a damp towel; hot weather treats such as dog icy poles are good; and if the dog seems unusually listless or not coping, contact your veterinarian, using damp towels to lower the body temperature if required.
This column has appeared in The Redland Times.

Posted by John Rumney at 4:53 pm No comments:

HAPPY memories of the television soapies in black and white come flooding back. The endearing stars shone brightly in glorious monochrome in the two decades of Australian television before colour arrived in 1975. Abigail as the saucy blonde in the Aussie soapie Number 96 had eyes glued to screens back in 1972 but a rival female, with a bit more class, was on her way down under after her debut in the UK.


-
THE 'migrant' was Lady Marjorie. The central character in Upstairs, Downstairs became the greatest screen heroine for newlywed Evelyn Le Brocq, who moved to Queensland from Melbourne with her husband Barrie 44 years ago. Evelyn grew up in suburban Collingwood with fierce loyalty to her local football team and Barrie in Caulfield with his heart behind St Kilda, "the mighty Saints". "It was quite a day when the two teams played each other," Barrie says.
-
BARRIE recalls shuffling on the sofa in anticipation of a switch to the AFL match of the day as his wife tuned into every episode of the frightfully English story of an upper class family and their servants in the early 1900s. The ups and downs in the London household failed to win the heart of the mechanic who spent 15 years with Mack Trucks, then turned his skills to rebuilding small engines.
-
EVELYN worked as a payroll/personnel officer until her retirement. The couple lived in Redland Bay and Cleveland in their senior years before moving to Cornubia. In November last year, Evelyn died, aged 79. Barrie says he became quite familiar with Upstairs, Downstairs through not only the original screenings and reruns but also his wife's collection of 68 episodes which were released on DVD to mark the show's 40th anniversary. "I had to watch it – it's quite good really but it's more of a women's thingo," he says.
-
BARRIE's For Sale notice highlighted the fairer sex, suggesting the collection as a Christmas present "for Mum". Mourning the loss of his wife, Barrie, who describes himself as "a crazy golfer", has been unable to play because of knee troubles. One of his main interests is the Mates for Mates program with Beenleigh RSL to help servicemen returning from Afghanistan.
-
Fundraiser update

CHRISSIE Stephens, of Victoria Point, thanks the guests who attended the recent morning tea at Redland IndigiScapes Centre for her daughter Sarah Gillies, who has leukaemia (Classie Corner, November 1). Chrissie says her neighbours Colleen Binstead, Carol Sneezby and Julie Jerrett have given much support. She asks that blood donors talk to Australian Red Cross about stem-cell donation. "If you would like to donate your stem cells, please – you can save another life like Sarah’s," Chrissie says.


This column appeared in The Redland Times in December.