Welcome to a new partner 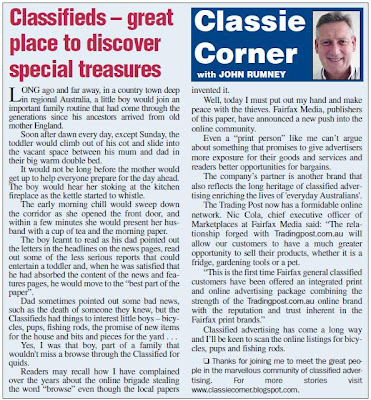 This week's column, as it appears in The Redland Times, Cleveland, Redland City, Queensland, Australia. Click on the image to enlarge it and take a trip down memory lane with me.

I take this opportunity to acknowledge all the international visitors to this site. The site statics indicate the migrants who have come from the UK and featured in this column have generated some of the traffic, and other visitors have been in countries including Poland, Sweden, Germany, France, Spain, Greece, The Netherlands, Russia, Canada, South Korea and Latvia. My posts on US sites some years ago - which now have generally drifted into the mists of the archives of cyberspace - may have been part of the reason for traffic from North America.

Of course, spammers would be among them but the referral and search details show a significant number of genuine visits. The stats must have been available on blogger for some time but I opened my eyes to the facility only recently and didn't pay much attention, other than to check the traffic volume.

This is also an opportunity to thanks the many hundreds of people who over the past 15 years have trusted me to write their stories. Again, I invite all and any to write to me with any updates they would like published. Thanks again.

Posted by John Rumney at 5:03 pm No comments:

THE dedicated carers of the aged deserve as much gratitude and support that the rest of us can spare during our busy lives.
The jobs require a lot of skills and professional discipline mixed with genuine compassion and empathy.
Anyone who has ventured among the dementia sufferers and other high-care patients in a nursing home can feel the weight of emotion that everyone – staff, patients and visitors – must handle with dignity.
The atmosphere can be heart wrenching but there's also a lot of joy, and that's what Rosevale Court manager Ben Cox focuses on when talking about his two decades' work in aged care.

ROSEVALE Court, a high-care facility, was built about 10 years ago on the site of a former rose nursery at Victoria Point. It is home for almost 140 residents and employs 180 staff.
A Thank You notice appeared in the Classifieds this week from the families of three deceased Rosevale Court residents.
The families thanked "the staff and administration ... for the care, respect and care shown to our loved ones".
Ben says the centre staff certainly appreciate the public expression but another group also plays a big part in the lives of everyone at Rosevale Court.
"Smiles are catching," he says. "And that's what all of us get from the many volunteers who come here.
"The more volunteers, the better service we can give.

BEN jokes that some volunteers "come in just to stop anyone cheating at bingo" but then clarifies that the residents with sight problems need some help.
"We have volunteers that just sit and talk to the residents about their lives and others who go shopping for those nicknacks that are needed; we have many residents who do not have family to do that for them.
"A group of men comes in to spend time with the male residents, and the poetry society comes in to read poetry.
"Several volunteers just help the staff and take out the morning tea; one volunteer folds laundry.
"Most of the volunteers want to have some form of contact.
"This week we had the Russell Island Singers, a group of eight, to entertain."

THE benefit of music to those in such care is widely acknowledged. Ben said there were occasions when residents who did not speak would suddenly sing along, surprising their carers and fellow patients.
The federal government agency Aged Care Australia says volunteers play an important part in the health care system and "form the community’s most valuable hidden asset".
Ben says the biggest benefits are the smiles, and Rosevale Court values them above all else.

Thanks for joining me to meet the people in the marvellous community of classified advertising; this column has appeared in The Redland Times.
Posted by John Rumney at 10:11 am No comments: 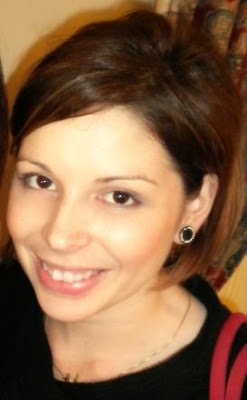 HAIRDRESSER Sahra Danes advertises a seven-day-a-week mobile service but she has declined any bookings for September 4, 2011.
Just one major project will be enough for Sahra this Sunday. The award-winning hairdresser expects to be in Redland Hospital giving birth to a son.
He will be the first baby for Sahra and her partner Benjamin Ferguson, who have chosen to start their family in Wellington Point where Sarah grew up with her sister Jessica and brother Nathan.
Sahra, daughter of author Kay Danes, says she always wanted to become a hairdresser, all through her years at Birkdale South State School and Sheldon College.

AFTER Sahra left the college in 2004 she qualified at the Brisbane School of Hairdressing then completed an apprenticeship at a Chermside salon.
In the tradition of the trade she says she then "made my way around the salons" and had a job in the Brisbane CBD before starting the mobile service about three months ago.
The business strategy aims to fit with the demands of motherhood. "I decided I needed something that was more convenient and flexible," Sahra says.
Sahra was having a busy week leading up to the big day; she even plans to work tomorrow. She says she will have about a fortnight break before resuming the mobile hair services.

SEVERAL honours including a catwalk award at a major hairdressing show and a business award for her city salon appear on Sahra's career summary.
She says she had no major worries when starting her own business.
"It wasn't too difficult," she says. "I had done a training and assessing course that covered how to manage yourself – it was pretty useful."
Sahra Danes Mobile Hair Services specialises in colouring and cutting. The hairdresser says curls are in fashion in a "back to the '70s" style.

40 years on, Whitlam 'splash' remembered
IT wouldn't be spring without a mention of that fantastic smell of chlorine before an 'ice-breaking' plunge into the pool.
Cleveland Penguins Amateur Swimming Club, which uses the pool at Cleveland State Primary School, will have its sign-on sessions tomorrow from 10am to 2pm and on Wednesday from 3pm to 6pm.
The club already has about 100 full members and the same number in its learners' programs, says president Cassie Sinnett.
Cassie says the club has operated since the pool was built in 1971 and opened by Labor leader Gough Whitlam who became prime minister in 1972. Club officials are considering an event to mark the 40th anniversary.

Thanks for joining me to meet the people in the marvellous community of classified advertising; this column appeared in The Redland Times on Friday, September 2.