It's a mean old world 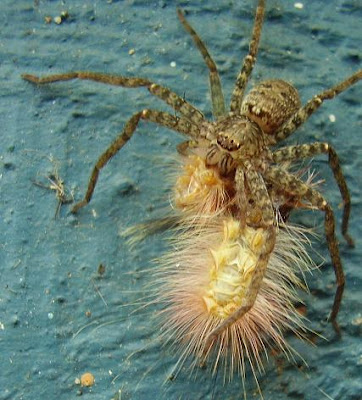 Just a quick diversion from the Classifieds' selection of pest treatments ... A great struggle caught my eye today as I worked on my house. Actually, it was a great meal for this spider. Hairy caterpillar. Yum.
Posted by John Rumney at 1:39 pm No comments: 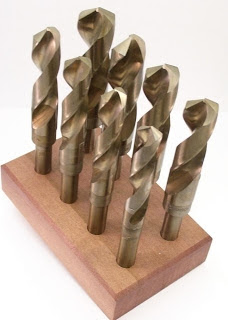 A DRILLPRESS on a workbench in a Capalaba home has become a high-tech tool in the new age of fear and suspicion. The drill has a special purpose. Its sharp bit bites into computer hard drives, making them inoperable. Computing consultant Chrissy Herford has implemented the whirring conclusion on more disks than she can count. It's just one of the services of Chrissy's firm Executive IT Connections, a regular advertiser in the Computers column.
CHRISSY has found a common disregard for ensuring the data on discarded computers does not fall into the wrong hands. "Some people don't realise how dangerous it is to just throw their old computer into the garbage bin," she says. "People sometimes say to me that they don't have anything personal stored. "I ask them, 'How would you like to have pictures of your head on a donkey's bum put out there around the internet?' "When you put it like that they are not so keen to simply put it in the garbage."
SHE has been so concerned about protecting people's privacy that she invited people to leave their old computers at her home so she can hear that special sound that sends the data to the cemetery of cyberspace. Born and reared in the central western Queensland town of Morven, Chrissy developed an interest in computers more than a decade ago. She says she started learning about computers by working on her own because upgrading to new equipment was too expensive; the interest grew into a business that now services not only home computer users but also other clients including state government departments. Chrissy says she started Executive IT Connections "to bring affordable and reputable computers and repairs to executive clientele and businesses at very competitive prices".
"I OPERATE my business from home to keep my costs down so that I can make owning a personal computer affordable for everyone," she says. "Quality is a must and I guarantee it. I only use parts that I would use myself and all parts come with warranties. "Best part of all is 'I am mobile' – I come out to you." Chrissy has a special mission to help seniors and offers them a discount. She believes many computing experts use 'geek' language when talking to seniors who prefer to plain and simple English. "I am happy to spend more time with them and be available to help them over the phone," she says.
CHRISSY says that in one recent case a widow gave away her husband's computers soon after his death then realised she wanted to write his life story. Although all his stored data was lost, Chrissy could at least supply a computer for the widow's project.

This column has appeared in The Redland Times.
Posted by John Rumney at 8:19 pm No comments:

Mystery of dead cat continues: A day in the life of vet nurse 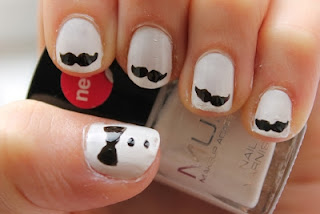 Image: Just one of a multitude of creative expressions inspired by that moustache. This one from The Little Duckling.

INVESTIGATIVE skills to match those of the fictional detective with the curly moustache, Hercule Poirot, would be needed to solve the multitude of 'cold cases' in the Lost & Found archives. Every edition of the Classifieds brings more mystery and intrigue with missing pets often the star players. However, it took a most extreme event to elevate one Redland feline to the cast, with a notice announcing "FOUND Deceased Cat ...", complete with capital letters as a mark of respect.
COMPASSIONATE veterinary nurse Clare Baker placed the notice after a woman delivered the young female tortoiseshell with a black collar to Cleveland Veterinary Clinic last week. "The lady found it in Ross Court – apparently it was hit by a car," Clare said. "It didn't have a microchip so I thought I'd advertise it so the owner could at least know what's happened to it and not need to keep searching." Clare can only wonder if the notice has allowed a grief-stricken owner to "get some closure" as no one responded. The tortoiseshell has been in cold storage awaiting a possible 'viewing'.
FROM time to time finders took dead animals to the clinic although "they are supposed to call the council" for removal from roads and streets, Clare said. While the latest delivery reflects a sombre side of a veterinary clinic soap opera, there must be a lot of joy in working so closely with the animal kingdom. And bright, loving smiles surround baby animals. The clinic sometimes accepts unwanted kittens for people wanting pets. "We desex and microchip them and give them their first vaccination," Clare said. "If they are with us for long enough, they get another vaccination. "The cost of the kitten after the three procedures is $200, which is cheaper than getting them done separately, so the owners do save some money."
CLARE enjoys her career as a veterinary nurse; she started at age 16 in North Yorkshire, England, where she was born and grew up. She came to Australia as a backpacker and worked with the RSPCA in Sydney before moving with her husband Steve to Redland City in 2006.
FOR many generations, browsing the Lost & Found notices has been one of the highlights of the "local newspaper" experience. It's free with every edition, and it really is an intriguing 'soap opera' of our lives and times, although many mysteries are never solved. Just what is the story behind that 'pelvic sling' found in Victoria Point? Sorry, I wasn't game to ask.

This column has appeared in The Redland Times.
Posted by John Rumney at 10:57 pm No comments: 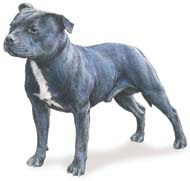 Image from fellow bloggers who posted a breed profile saying : "Originating in England, the Staffordshire Bull Terrier was bred for bull, bear, and lion baiting. The aforementioned 'blood-sports' were officially eliminated in 1835 when Britain introduced animal welfare laws. However, 'blood-sport' proponents began using this breed for organized dog fighting.

TWO days of gut-churning fear and worry ended with tears of joy this week when a playful Staffordshire bull terrier puppy returned to her Birkdale home. Six-month-old Millie was already home and safe when she starred in a Lost & Found notice in Tuesday's Bayside Bulletin. The owners – a couple and their two daughters – are mystified over how the dog escaped from the property. They are now worried about security and asked not to be identified. Julia, who placed the notice, said the dog's disappearance had made her aware of the high rate of theft of such terriers for dog fights. She said that during Millie's two-day absence she had also posted notices on internet forums including Facebook, researched media reports of dog thefts and confirmed with police that they were investigating the dog-fight claims.
A LOCAL resident found Millie but the fear that she could ever fall into the control of criminals continues to haunt the family. Neighbours reported the dog had barked and yelped late at night before a car pulled up outside the house during heavy rain and quickly had left. "We got our dog back but there are many, many owners out there whose dogs haven't been returned," Julia said. "I have been inundated with calls and emails from people who have lost their dogs. When there is a reaction like this there must be something going." She believed stolen dogs were subjected to unspeakable cruelty in fight rings and the criminals involved needed to be brought to justice.
REPORTS posted on websites about dog thefts in south-east Queensland and the fight concerns have received dozens of comments, including those of sceptics who contend that thieves target purebred dogs because of their value, not for fighting. However, Julia said she had spoken to two detectives, one in the Redcliffe district and other on the bayside, who said the possibility of the dog-fight rings was under investigation. She said a detective confirmed police were still checking claims on one forum that a woman had been driving around Mt Cotton and Redland Bay areas stealing dogs and cats and that residents had taken the registration number of her car. However, the number had not identified any culprit to date, the detective told Julia.
JULIA has put Millie into care at another address, fearing thieves may still target the dog, and was waiting for a neighbour who has security cameras to return home after a break. "We are hoping the video caught something that happened that night and the car that was reported outside our house," she said. "Just how she got out of the property I may never know."

This column has appreared in The Redland Times.
Posted by John Rumney at 10:37 pm No comments:

THE tempo of the heartbeat may have increased with tantalising anticipation the other day when the word "plein" appeared in a classified notice. The discovery of a spelling mistake is always a memorable moment for the dedicated readers who, with red pen poised, comb through the fine print of newspapers, ready for a gleeful cry of "Darling, I've found another one" and then some grumbles and mumbles. But there was no mistake in the Training and Tuition notice promoting Vicki Whalan's drawing classes.
THE term "plein air" derives from the French language, and just to ensure that everyone understood Vicki published the translation "open air" in brackets. The cultural touch honours not only centuries of artistic practice but also Redland City's beautiful bayside environment. Vicki was seeking students for plein air drawing classes she will hold in the Oyster Point park every Thursday from 9.30am. "It was the first time I have advertised and I already have seven students, so I am very happy with the result," Vicki said yesterday. "The scenery around the bay is just so stunning it makes the perfect setting." The bay, in fact, was the drawcard for Vicki and husband Peter to move from Lighthouse Beach on the NSW mid-north coast to Oyster Point just under two years ago. They had visited Queensland while their son Kurt and daughter Megan studied at university and Vicki fell in love with "beautiful Moreton Bay" after they came to Cleveland for an Anzac service.
VICKI has studied not only fine arts but also training and assessment. She describes her work as figurative, representational and observational, and admires the work of the masters and some more modern practitioners such as Clarice Beckett, a Victorian hailed by the National Gallery for her "lyrical and evocative landscapes". A drawing by Vicki won the 2012 Redfest art prize and her drawings and watercolour and acrylic paintings will feature in a joint exhibition with the works of Mike Scott and Robyn Dunn in the Old Schoolhouse Gallery, opening on Friday, March 8. She says the exhibition includes her figurative studies of the human form, with some "cropping" providing close-up images.
ALTHOUGH the smell of paint and the gentle, almost inaudible sound of pencil on paper seem a long way from the taps and clicks of the computer keyboard of much modern art, Vicki says the two worlds do come together. She also uses Photoshop to see some subjects in a different light during her research. But she's happiest in the plein air and thanks Redland City Council's Michelle Wilson for assistance with her application to use the Oyster Point park.
Posted by John Rumney at 10:16 pm No comments: