'Oh, no, the landlord has sold our house': cry of rental trauma 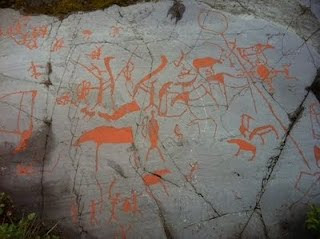 THE anthropologists translating ancient drawings and symbols on rock faces must encounter some repetitive themes and messages.
One such theme among the fading images that have survived through the millennia would have to be: "Cave for rent, front and back crevasses for easy access, fireplace, rainforest view... just one bison leg a month."
Rental accommodation has probably been around since the caveman days but those who rent can have a tough time in our modern society.
The Australian society is not generally regarded as divided by class but it certainly has two distinct sectors – those who hold title to property and those who don't.

THE division was apparent to me a few years ago after I moved into a neat, new slice of suburbia in a masterplanned estate.
There, the owners lived in fear of two types of troublesome creatures, and ripples would spread across the morning coffee when they shuddered about the appearance of lawn grubs and renters in the estate.
Many of the owners, jealously looking toward capital gains, believed the rental component could reduce their property values because "the wrong type of people" were in the estate mix.

I STILL hear this sort of garbage in my little niche of Redland City, and can only suggest that the 'let's get rid of the renters' mindset reflects selfishness and a basic lack of understanding and respect for others.
In recent years, the escalation in property prices has caused rents to go through the roof, draining the resources of struggling families and making it impossible to bridge that "deposit gap" and get their own homes.
Some choose to rent, of course, as it can be a cost-effective option, but all must be prepared to find new homes if their landlord decides to sell. This means a lot of trauma.

A FOR SALE notice for three trees growing in pots told of one Cleveland resident's preparation to move to a another rental home.
Silke Lemmert soon sold her two-metre olive tree and slightly smaller lime tree, both of which have produced little crops in the two years since she moved from Melbourne. A beautiful kafir lime was still available yesterday.
"We have had the room for them here but the house has been sold we have to move into a flat with only a small balcony; we can't take the trees," she said.
Silke migrated from Germany about 15 years ago and lived in Melbourne until heading north about two years ago.
She likes the bayside lifestyle and is delighted to have found a new home in Cleveland.

Thanks for joining me in the marvellous community of classified advertising. This column has appeared in The Redland Times.
Posted by John Rumney at 12:57 pm No comments: 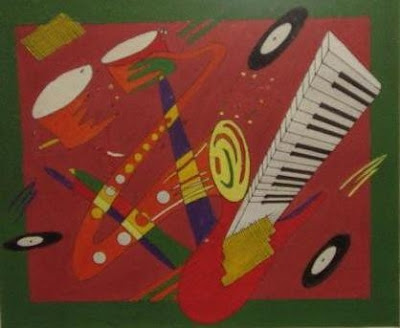 KIDS growing up with the diverse mix of popular music styles since the birth of rock 'n' roll in the 1950s seem often to show great distaste for their dad's favourites.
As each 'brand' has taken over the airwaves after another, anything from the past has been strange and prehistoric to young devotees of the latest offerings.
My dad drove his kids to smirking and grimacing huddles behind closed doors when every so often in a celebratory mood he ramped up the volume on our old radiogram for his Hammond organ favourites.

IN those days that now seem so long ago, Dad's love of the dulcet tones had to stack up against his son's obsession with the hard rockers like Jimi Hendrix.
The cultural clash became a family joke; sometimes it was a bit overheated.
Such a division over musical tastes seems fairly common.
The invention of the 'walkman' cassette players with headphones a decade or so later was a godsend in family politics; finally the warring parties could retreat to their private musical heaven.
However, during the 1970s and '80s, at least one boy growing up in Capalaba was saying, "Dad, turn it up, please."

THE boy was Leo La Spina now living with his wife, Melissa, daughter Chiara, 10, and son John, 14, in Alexandra Hills.
Leo fondly recalls how, from a tender age, he shared his dad's love of jazz and later pestered his Ioana College music teacher to let him play the saxophone but had to be content with the "burp, burp, burp" of a bass clarinet.
Then came some breakthroughs: the loan of an "old silver alto sax" from the school's collection, and in 1988 a special moment in father-son relations.

"DAD said he'd buy me my own tenor sax if I learnt to play Aker Bilk's Stranger on the Shore," Leo says.
"So I did, and I am still using that same sax today."
Leo also concentrated on clarinet and had his first professional gig at age 16.
With a lifetime's involvement in the Redland band scene in big and small line-ups and as a solo performer, Leo now lists a repertoire of more than 400 songs across the spectrum of styles and genres.

HE says his greatest love, however, is for the music of the sax players he first heard, courtesy of his dad.
"I love my Dexter Gordon, John Coltrane and Stan Getz, the sounds I grew up with; I studied those guys," Leo says.
"But I play everything from dinner music to top 40 and Lady Gaga."
Leo features at the Icon Bar, Raby Bay, from 5pm to 9pm every Saturday. He teaches clarinet and saxophone, with his Training & Tuition notice specifying students need their own instruments.

PS. I saw Leo's performance last night at the Icon. What a blast! He's not just a great reed player but a showman to boot! Don't miss the chance each Saturday to hear him play not only straight jazz but heaps of classics from Continental era to Sweet Alabama, giving new life and vigour to favourites, no matter from which category/era. Of course, you can see him online, eg www.youtube.com/watch?v=9T_jvIQ5FB8/

Posted by John Rumney at 5:50 pm No comments:

My life in jazz and love for the guitar

The lists of referring URLs and search terms that show in the visitor statistics for this site make interesting reading for me.

Many visitors have searched for a name; sometimes it's mine. I can only wonder who punched "John Rumney band player" into Google recently and clicked on the link to ClassieCorner.
That someone seems to know about my passion for jazz and maybe some of my recent history playing guitar in the Moreton Bay/Redland City community.
The link took them to a page that had nothing to do with my music but simply included the key words, so I thought I should post a bit more personal info about my life in music and some of the influences (this link will tie you up for a while so crack a coldie before you click).
This exercise has called for some serious name-dropping - jazz players, composers and personalities who have had an influence on me over many years. Some are famous and some don't even come up on an internet search. It's just a bit of fun ... Freddy Greensill, Phil Manning,Pat Hussey, Chris Sulzberger, Jimi Hendrix, Cream, Ten Years After, the Beatles, the Stones, the Gonads and Patriots Nite Train, Mike Ward, Ian Neal's Music to Midnight, John Coltrane, the Red Garland Trio, Errol Garner, Oscar Peterson, George Shearing, Judy Bailey, Gordon Cuming, Lionel Hampton, Clare Hansson, Rick Price, Brian King, Mike Garry, Sid Hillier, the Beegees, Tommy Flanagan, Charlie Parker, Ray Sparks, Fred Young, Antonio Carlos Jobim, Charlie Byrd, Stan Getz, The Crusaders, Larry Carlton, David T Walker, Lee Ritenour, Stanley Clarke, Carmen McRae, Ella Fitzgerald, Peggy Lee, Billie Holiday, the Andrews Sisters, Nancy Wilson, Frank Sinatra, Bing Crosby, Mel Torme, Johnny Mercer, George Gershwin, Ira Gershwin, Hoagy Carmichael, Cole Porter, Sid Bromley, Joe Pass, Mileham (Dr Jazz) Hayes, Johnny Nicol, Vince Genova, Scott Nicol, Jerome Kern, Toots Thielemans, Rick Farbach, Stan Kenton, Carol O'Rourke, Sue Gillespie, Jon Jass, Viki Carryl, Caspar Schutte, Rosco from Redlands, Curly and Col from Lamb Island, Chris Price, Mark Duffy, George Bowler, Tao, Polisi, Dave from Coffs, David Lang, DJ Vince, Gabe Phoenix, Vinicius de Moraes, Astrud Gilberto, Carmen McRae, Lionel Nadel, Tony the harp player ... and this is just for starters; I'll add to this as time permits as I have just started to try to define 'jazz and me', a way of life that began when just a pre adolescent I tuned in with a crystal set aerial clamped on my bed base to listen to Arch McKirdie's Relax with Me on ABC Radio. That was half a century ago ...
Posted by John Rumney at 3:54 pm No comments:

Family research can be exhausting and emotional

Image of sinking ship from microsoft. 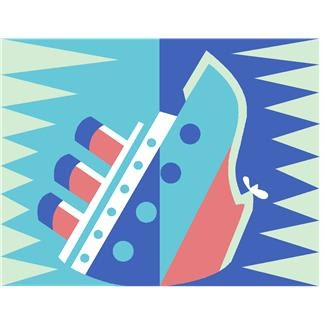 THE death and devastation from war has been top of mind this autumn with a throng of Redlanders to Anzac Day services.
Pain and suffering from war runs through society, scarring the lives of innocent families far from the battlefields.
Theresa Meaclem, of Alexandra Hills, told this story:

"My grandfather, William Strunks, was the captain of a cargo ship and was killed when it was sunk by a German torpedo during World War II.
"My mother, Winifred, was only two years old.
"The wartime widows often became distanced from their families and after grandad's death my grandmother moved from Ireland to England and Australia.
"My mum didn't know anyone in her parents' families.
"I started some family research to find these people, and it was a very emotional experience, especially for Mum. It brought tears to her eyes to realise she had such a big family.
"With the help of the internet I managed to find 180 relatives she never knew she had."

THE experience prompted Theresa to offer help in family research. She has called her service AncestorLink.
Theresa says her fledgling enterprise has already had some appreciative clients in its first few weeks.
She tutors people on the family research websites and does the research for those who are uncomfortable using keyboard and screen.
The work can be exhausting because of the attention to the detail and the underlying emotions, she says
"I was able to find 60 to 70 members of the one generation of an elderly lady's family dating from 1836 in Wales," Theresa says.
"One of the special results was that I located one of her elder sisters who had all the family photos so now she has copies of the pictures that she didn't know about."

AS part of the AncestorLink package, Theresa creates audio-visual presentations on CDs.
The Meaclem family is new to Alexandra Hills. Theresa, her husband Ross and two of their four sons have just moved from Hervey Bay where they had a farm growing sea cucumbers.
Theresa says she and Ross were Australian pioneers of the sea cucumber trade. "We were virtually the only growers in Australia until about five years ago."
She says the sea cucumber is in big demand and the market "can't get enough of them" but she and Ross decided on a "sea change".
"We were on the farm for 20 years and felt like it was the right time to do something different so we sold the property and decided to check out life in the city," she says. While Theresa is at the computer, Ross is working as a handyman.