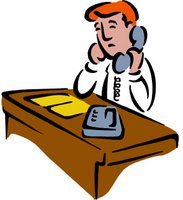 The telephone reigned for a century, not just as the king of the classifieds but also the queen.
Nowadays email has forged a niche in the marvellous community of classified advertising.
Today’s post is dedicated to the telephone. We are also walking on the wild side with the gentleman in the illustration.
Readers please note: He bears no resemblance to the columnist. His star role here follows my reading about web-based design.
As I mentioned a few weeks ago, a critic urged me to introduce illustration.
This grated a bit because, after suffering a lot of smoking-gun design trends in the mainstream media, this blog is my private space, free from terrible waste such as:
Hunting up file pictures to illustrate news stories. The practice always made my blood boil.
I would have a notebook full of enough scribble and dash of Pitmans for 1000 fresh words but the designers always wanted to steal the space with file pictures that did not take anyone anywhere and would send messages of triumph: "Ten pars only.".
We’ve all seen it – a "skull shot" so big you can count the blackheads on the nose of a poor old public figure who was quoted in the last par and was guaranteed to be "on file".
Now I have been ratting around the clipart to prove to myself the ridiculous waste of time and space. Because that's one thing the blog has given me. But don't worry. I won't get too carried away with the practice of hunting up illustrations that relate to the text.
After all, for all those great decades, we did not have pictures on our phones and no one worried about that.
But back on track, the telephone and its part in the Classies (Sunshine Coast, 1998):

IT may come as a shock to some readers but the average human in the average size house needs more than six rings to get to their phone.
This has been revealed in research conducted exclusively for the Check Out Classifieds. The researchers -- me and my spook (Classie Corner, October 18) -- found that a disturbing percentage of potential buyers of a furniture bargain must live in one-bedroom units, caravans, tents, motor vehicles, handbags, belt loops and certain other small crevices where the handset is always just a nano-second grab.
With a disgusting assumption that people take their remote handset to the loo, such impatient morons who call themselves buyers allow just six rings before wiping off the prospect as not at home or too upemselves to answer. Fair dinkum.
To the four of 11 who responded in this way on two days to my ad for a leather lounge at $100, I wish upon you the curse of the excruciating "Hi, I'm down the surf right now ..." recorded rambling, and I hope you get RSI in your trigger finger.
Understand -- and I'm only going to write this once -- the average human takes the duration of one ring to execute each of the following actions: 1. close their book, 2. wipe their bum; 3. pull their pants up and press the flush; 4. run their hands under the tap (feeling guilty about not getting the soap to lather); 5. sprint to the phone while pulling up their jeans; 6. pick up the handset ... and hear you hang up.
The telephone has been much maligned by traditionalists of journalism who say that you must see the whites of their eyes but I always think of the sometimes grumpy-charming-informative-newsbreaking Lawsie who has managed to earn the most any Aussie lad could hope, just by using the phone.
I guarantee that John Laws' lackies let John Howards' phriggin' phone ring more than six times before he's branded as too gutless to face the terrible tonsils.
In our industry, where we are not just fishing around for a bargain but making calls that could be important to all our readers, listeners and viewers, a 12-ring policy is predominant.
Of course, all the 10-ringers in the office now will be on my back. But the number of strikes I've had on the 11th has been significant.
Newsmakers, seemingly as well as advertisers of bargains, live in the average-size house and don't (always) take the handset to the loo. The analytical academics being churned out of the university that has snuck under the guard of the six-ring subintellectuals will have noticed a flaw in the methodology of my Check Outs Survey.
I can't be sure that the six-ring torture related to my ad. And cobber(s), I don't really care: I will simply get a caller ID on my phone and inflict some six-ring paybacks on you.
Posted by John Rumney at 9:47 pm