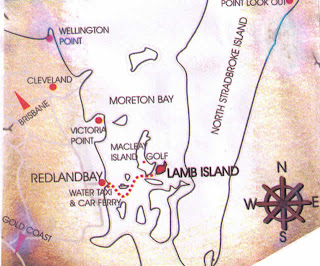 FEW can match the cheerful nature of Lamb Island's Col McInnes.
Affable Col seems to always wear a broad smile and be genuinely pleased to shake another hand in greeting.
His personality certainly suits his role as host at the bed and breakfast he and wife Kay set up in 2002.
At the time, the southern bay islands badly needed guest accommodation and the couple blazed a pioneering trail, gaining recognition with a Redlands Tourism Award for hosted accommodation in 2005.
The McInneses, who have notched up three more credits as award finalists in subsequent years, are great believers in the power of the Classifieds in their local paper, advertising Lamb Island Bed & Breakfast on our Find Us First page.
SYDNEY-born Col has long known the benefits of such promotion. He says he started his first business at age 17 and for some years he sold advertising for community newspapers.
But Col is not the sort of business mind that sacrifices the 'scent of roses' for the cold facts of the balance sheet. He certainly aims to get out there and enjoy life to the full, even if the effort sometimes leads back to a business element.
A love of rugby, for example, lined him up Col for a stint as treasurer of the Queensland XXXX Golden Oldies Rugby Club.
B&B guests with even a passing interest in the great game have undoubtedly heard of the club's trip last September to an international carnival in Scotland, where Col wore the centre's jersey and, of course, revelled in his Sccottish heritage.
COL and Kay are longtime supporters of the Redland Gathering of the Clans. Col often catches eyes of passengers on the bay ferries when wearing his kilt to official functions.
Such functions include his masonic meetings. Col, a past master of Redlands Masonic Lodge, carries a weighty title with the Scottish lodge that meets at Kedron.
Grab a cup of coffee to help you get through this … he's a Most Excellent and Perfect Companion of the Order of Rose Croix.
Phew. That probably reflects the complexity that exists behind that affable smile.
Col has just taken a new title after his election as Karragarra Yacht Club treasurer, adding to his commumnity involvement in the island group he loves.
Col and Kay are gearing up for a busy summer trade at their fully self-contained two-bedroom B&B, which has everything guests need for a luxurious weekend – including a private six-person spa.
AFTER a day on the bay guests can enjoy a drink at the bar and, of course, chat with Col about anything from the fortunes of the Wallabies to the joys of sailing.
(Thanks for joining me to meet the great people in the marvellous community of classified advertising. This column has appeared in The Redland Times. Image from www.lambislandbandb.com.au).
Posted by John Rumney at 12:04 pm