Tale of loser who smoked 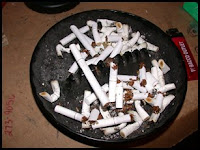 EVERYONE has been talking about the record Lotto draw but another prize waited for a claimant this week in the Redlands.
The local prize is quite a few million bucks short of the big national booty but worth having, nevertheless - if you are one of that "dying breed" of nicotine addicts.
A carton of cigarettes that a shopper found in Koala Park Point Shopping Centre three weeks ago have featured in the Classifieds Lost & Found.
The finder, Victoria Point resident Margaret Sullivan, was puzzled only one caller tried to claim the carton.
Some members of her family have smoked so she knows "it would have to be worth a bit of money".
MARGARET's husband, John, answered a call from a man who said, "You've got my cigarettes - I want them back", but then hung up when John asked him to state the brand.
Still with hope of finding the rightful owner, Margaret does not want to give away too many details of the find on Saturday, June 13.
"I tracked the shop that sold them by the colour of the bag and left it with them but no one has inquired," Margaret said.
"I also left my name and number in the shopping centre office."
THE way social thinking has developed on the smoking habit it is unclear whether this yarn is about a smoker who lost or a loser who smoked, or maybe just needed a smoke. In any case, the loss of a carton was probably a good time to give up.
ISSUE an SOS through the Classifieds and you'll have a good chance of a rescue. Last week's call by vision-impaired angler John Gallon, of Birkdale, for a fishing buddy trolled up some hopefuls including Peter Lawrence, Gary Wheeler and Rod Johnson.
John likes to get out on the bay in his fibreglass boat but Rod said he had his own boat and occasionally needs partners.
Rod cited a website that allows anglers to hook up with likeminded people - which leads to a subject close to my heart.
Give me the marvellous community of Classified advertising in the local paper - any day. Your local paper carries the respect and trust that have built up over many generations.
You can easily have direct contact with the people involved in it and you can get results.
John previously advertised for a fishing buddy in 2006, so he had three years of value from that "posting" in The Redland Times Classifieds.
The "Classies" have a maternity hospital, a mortuary, everything between, and an associated website, http://www.redland.yourguide.com.au/

Thanks for joining me in the marvellous community of classified advertising. This column has appeared in The Redland Times, a Fairfax Media newspaper.
Posted by John Rumney at 7:55 pm