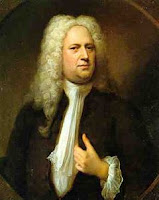 Image of George Frideric Handel from wikipedia.
THE need to organise early has been evident in the four-line notice Debra Kuss posted in the Classifieds’ Car Pooling column.
Debra was looking for someone who drives from her home suburb of Wellington Point to Sheldon each day and offered to share fuel costs.
She placed the ad immediately after applying for a job at Sheldon. Her application was unsuccessful; she no longer needs the lift.
Her job search continues.
THE proactive transport call undoubtedly stems from Debra’s keen organisational abilities as an administrator.
Since 2001, she has worked in the public sector, with the Local Government, Sport and Recreation Department and the Crime and Misconduct Commission, and is now keen to gain a position in the not-for-profit sector, perhaps with a charity.
"I previously had experience in agency and ‘temping’ work with a lot of short-term appointments so I can hit the ground running," she says.
DEBRA, a mother of three, is already involved in the helping sector. She works with her husband, Gordon, on the music program and other administrative duties at Southgate Community Church, where he is the associate pastor.
She also sings and plays piano, keyboards and bass guitar at the Southgate church, which is on Mt Petrie Road, Mackenzie, and has a congregation of about 60.
The church has a worship team of six to eight providing the core of its musical program.
Debra’s musical interests extend further to her membership of Brisbane Community Choir, for which she also assists on administrative duties.
HER passion for church music blossomed about 30 years ago.
"I played with recorder bands and things like that as a child and I started teaching myself the organ when I was 10," she says.
"I was later involved with the ministry team from bible college and our choir toured for a month from Melbourne to Mackay.
"That was quite an experience."
Debra also has credits conducting church music for churches including Logan Wesleyan.
WATCH for her next transport notice because her job applications are still going out.
Maybe the driver will be able to turn off the radio and simply let Debra sing.
Coming up to Easter she has one piece of music on her mind – the Hallelujah Chorus from Handel’s Messiah. It’s Debra’s favourite.
The stirring and triumphant strains are a certainty for Southgate this Easter.
Thanks for joining me to meet the great people in the marvellous community of classified advertising. This column has appeared in The Redland Times, a Fairfax Media newspaper.
Posted by John Rumney at 8:10 pm