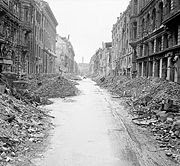 Image: The World War II destruction in Berlin – from wikipedia.
THE stark scenes of devastation in the Victorian bushfires have brought tears to Inge Drake’s eyes as, safe and sound in her Birkdale home, she has watched the television reports.
"I feel so sorry for all those poor people who have lost so much," Inge says. "I can understand how they must feel."
Images of charred remains of thousands of houses have rekindled Inge’s memories of the bombing of Berlin during World War II.
In 1943, Inge Krull was seven years old. Her dad, Kurt, was a German army engineer and in the Russian campaign. She lived with her younger brother Dieter and their mum, Auguste, in the family home.
"One day we went to the movies and when we came back there was no house, just a great big hole – it was monstrous," Inge says. "I remember being sorry that I had lost my teddy bear."
THE trio found refuge in Berlin with Kurt’s father but Inge contracted scarlet fever. She was in hospital when her mum took Dieter to East Prussia, where they were to live with Auguste’s parents. Inge says she spent six terrifying weeks alone, with hospitals evacuated as bombing raids targeted them.
On her discharge, she waited for hours on a seat in a long vacant corridor, wondering in the silence if her mum would manage to come back to pick her up.
Finally, a small figure appeared in the distance. As it came closer Inge could see the "tiny person, not even five feet (152 centimetres) tall" was Auguste.
At least part of the wartime nightmare was over. But for the next two years, Auguste and the kids kept moving, "running away from the Russians".
KURT found his family in Bavaria in 1945. They migrated to Australia in 1953. Dieter now lives in Melbourne. Kirk and Auguste spent their final years in a Buderim retirement village. Kirk died in 1981 and Auguste in 1984.
A Birkdale resident for 30 years, Inge does not take her current comfort for granted.
"I have a home, food, furniture, a bed to sleep in … I thought what can I do for the poor people in Victoria," she said.
"When they have put everything into their farms, then lost it all, even if you gave them a million dollars they haven’t got the spirit to start again. I can so easily feel for them.’’
INGE talked with her friends, Michelle and Barbara. They decided to sell bromeliads to raise money for the relief effort.
The sale was washed out last Saturday but it will be on again tomorrow, all day, in Bayford Street.
Thanks for joining me to meet the great people in the marvellous community of classified advertising. This column has appeared in The Redland Times, Cleveland, Redland City, Queensland, Australia.
Posted by John Rumney at 8:45 am