'Just call me Kiwi' rides into new future in business 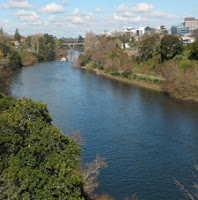 This column appeared in The Redland Times on Friday, December 12, 2008. Image of Waikato River from wikipedia.
A NEW future on two wheels will start to roll tomorrow, Saturday, for John ("just call me Kiwi") Smith, who migrated from New Zealand looking for opportunities and has certainly found one at Capalaba.
John grew up in the Waikato district, developed a career in hotel management in the Bay of Plenty, then crossed the ditch almost a decade ago to take up a Capabala address.
Customers of the Capalaba Hotel bottle shops are familiar with John’s lively personality and he says he’s grateful for the work that helped set him up in Australia.
FOR about the past three years, John’s cheerful voice has been very familiar to clients of his gardening firm, Johnny Appleseed Home and Garden, and he is pleased to keep his vocal cords moving on notable commercial clients including the Port of Brisbane Authority and a Gold Coast car yard, as well as many residential clients.
Now, the business community on New Cleveland Road, Capabala, is hearing John’s cheerful voice as he has been working on a former motorcycle shop as the base for his new venture, Sunshine State Motorbike Hire.
After the doors open at 10am tomorrow for an open day, John will fire up the barbecue to celebrate. He plans to open at 6am every Saturday and Sunday for riders who need an early start.
JOHN has invited dads and mums to take their youngsters and even pets on leads along to see the "fun machines" that are available for hire.
He makes no promises about sparing them time to meditate over the machines. "I can keep talking under water," he says.
And he has lots to talk about. The motorbikes, scooters and recreational vehicles represent just one of John’s many interests in life.
"Dogs are my passion," he says. "I train dogs and I’m going to do it for free from the shop. On the last Sunday in January anyone with puppies aged 15 months and under can bring them along for training.
"I trained gun dogs and looked after guide dogs in New Zealand."
A MORE formal "opening" is set for Thursday, December 18, after tomorrow’s family day.
One thing that won’t be neglected is John’s great love of Redland City. He says people anywhere in the world "would kill" for such an urban lifestyle on the shores of Moreton Bay.
But he says the friendliness of the people here – more than anything else – has made his move to Australia a great success.
THANKS for joining me to meet the great people in the marvellous community of classified advertising.