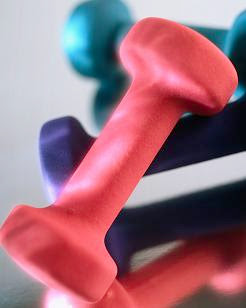 (This column has appeared in The Redland Times, Queensland, Australia.)
A SPECIAL class is under way at a Victoria Point gymnasium. Newly qualified instructor Amy Dakin celebrated her 24th birthday by conducting her first fitness group at One Life Health and Fitness Centre.
Amy soon had another special occasion. Monday, July 27, 2009, was the anniversary of her double kidney transplant at Princess Alexandra Hospital.
The past four years since the 15-hour-long transplant operation have been tough for Amy, who studied nursing for three years but had to seek a different career because the immuno-suppressant drugs that stop her body rejecting her new kidneys make her vulnerable to catching infections.
“EVERY time I went out looking after sick people I ended up very ill,” Amy says. “The last time, I almost lost my life.
“It started like the flu but then all of a sudden spread through my body and I almost lost my transplanted kidneys.
“I was in hospital for 12 weeks.”
Two years after the transplant, Amy needed a second operation to remove her native kidneys, which were causing infection in the new ones.
But, after suffering neurogenic bladder disorder and reflux since she was eight years old – with four years on dialysis and several heart attacks linked to the kidney condition -- Amy has taken all the knocks in her stride.
“It has been a bit of a struggle,” she says. “But I guess it just makes you stronger.”
She says she developed a strong interest in fitness over the years and formerly has instructed in bellydancing at One Life.
NOW, she sees all the threads coming together, with her assistant nursing qualification and her new Certificate III in fitness playing complementary roles.
She has kept her most up-to-date medical text books but offered the rest of her collection – including medical encyclopedias – free through the Classifieds.
About 15 callers responded to the ad.
Amy says she lived all her life in the Brisbane suburbs, mainly Coorparoo, before moving to the Redlands about four years ago.
She is excited about qualifying as a group fitness instructor using pre-choreographed techniques for strength and endurance training, and she is really enjoying life.
“Even when I was sick I tried to keep driving myself into sport,” she says. “Now I feel healthy enough to do it.”
(Thanks for joining me to meet the great people in the marvellous community of classified advertising. This column has appeared in The Redland Times).
Posted by John Rumney at 10:49 am