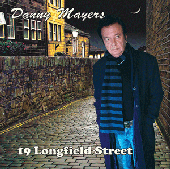 Image: Danny Mayers' new album. Visit www.myspace.com/dannymayers and www.dannymayers.com/
ONE of the golden voices in the legendary Australian band The Delltones revealed a secret during a recent visit to Macleay Island.
Lead singer Danny Mayers, relaxing with his partner Christina Mayor during a break from his busy concert schedule, told barbecue guests at the home of a jazz-singer friend, Carol Sefton, he had breathed new life into his musical career by kicking the nicotine habit.
"What giving up smoking has done for me is simply amazing," Danny said. "I no longer get tired like before; I can taste food; my clothes don't smell; I don't cough anymore; and my [voice] range was always high but now it's higher."
He said he would always marvel that the improvements started the minute he walked out a hypnotist's door after just one short session.
DANNY's story was enough to send one guest scurrying for Redland City information about hypnosis. Redland Bay hypnotist Angela Griffin, who advertises in our 'Massages/Therapeutic' column, said Danny was one of many fortunate smokers.
"As well as those who stop smoking after one session there are others who are not ready to deal with the causes and may require several sessions," Angela said.
"There is a misconception that you only have to go to a hypnotist once and a miracle will occur but the mind is very complex and work may be needed for the results that are required."
She said the hypnosis success rate was also good with gamblers and drug addicts.
ANGELA is among hypnotherapists anticipating a rush on such treatments. She said the July 1 introduction of health fund benefits for hypnotherapy had prompted her to complete her membership with the Australian Hypnosis Association; she believed the membership was only weeks away.
The honour will come about two decades after she received hypnotherapy for anxiety and anger. "My mum encouraged me to see a hypnotist and as a result I became a lot more positive," she said.
Angela and her husband Kent, who is a remedial massage therapist, practise their therapies from their Auster Street home.
They have found the combination of their skills has been valuable in helping those who suffer a wide range of conditions.
THE combination had achieved "a very positive effect" for a man after a car accident; it had improved his state of mind and attitude to life, Angela said.
She said her techniques include analytic hypnosis to help people deal with the emotions that relate to memories of past issues but she also incorporated other counselling systems.
(Thanks for joining me to meet the people in the marvellous community of classified advertising. This column has appeared in The Redland Times, Queensland, Australia).
Posted by John Rumney at 12:25 pm