Grins and grimaces of garage sales 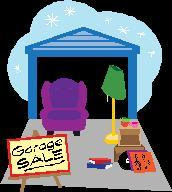 AS the spring cleaning gains pace, garage sales abound in The Redland Times' Classifieds. It's timely to warn vendors – don't lose your useful, treasured and valuable objects.
Think carefully about what you need to sell and resist the urge to slap a tag on everything you think you can spare.
Ask yourself how many times you have sold something at a garage sale only to pay top dollar for a replacement, sooner or later?
This sort of 'sell then buy' madness probably has happened to all of us sometime; we may blame stress from rising in the pre-dawn as cars pull up, even though we have advertised a 7am start.
Then there's often the frenzy of carrying and pricing items, and generally getting ready for the rush.
HARDENED bargainers, including dealers, usually are the first wave, undoubtedly knowing the value in negotiating with someone who is weary from a hard week's work, has been deprived of sleep and is likely to make errors of judgment.
A mate sold two gas bottles for a fraction of their value, then late in the day bought some fillet steak with the sale cash, only to realise he had just sold the fuel for his barbecue.
The solution was a trip to the hardware store to buy a new bottle for more than he earnt from the sale of two.
A few years ago and preparing to move house, I rose early, taking all the sale items to the front lawn. I carried out a lounge chair without realising it contained hidden treasure.
AT the time, I habitually put my wallet under the cushion at night.
After two men, without haggling, immediately handed me the $15 price and hastily loaded their trailer, I realised something was wrong and managed to snatch back my wallet just as they were about to drive off.
A 'must' for vendors may be double-strength coffee but the golden rule is to prepare early, thoroughly inspect everything, minimise sale-day stress and always have someone on duty against theft.
FROM the smaller polfolio of buyers' loss case studies: The day after a sale in the 1990s an elderly woman arrived at my house: "Have you by any chance seen the stone from my ring? It's a ruby. The ring was my grandmother's. I went to 15 garage sales yesterday and along the way, somewhere, the ruby has fallen out. I am retracing my visits."
The gap in the old rose gold was huge. This was a tragedy. I could only wish her luck – and the same to all the buyers and sellers who will fight it out tomorrow.
(Thanks for joining me in the marvellous community of classified advertising. Image from http://office.microsoft.com/clipart/).
Posted by John Rumney at 12:14 pm