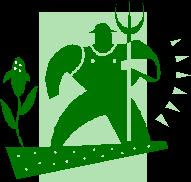 Image from the Microsoft collection.
A 'RARE breed' featured in bold type when Jim White posted a notice wanting to buy cattle.
The headline reflected Jim's pride in his long heritage of agricultural production. It said, “Local Farmer”.
In our modern bayside city where the fertile soils now grow houses on former farmland, the tag represents one of an 'endangered species'.
The latest government headcount found fewer than 500 Redlanders who admitted to working in agriculture, forestry or fishing. The figure was about half that of the mid-1990s.
Jim, who celebrated his 80th birthday last Friday, has farmed in the Redlands for the past 30 years but his heritage comes through generations in the English district of Cambridge where his dad and grandad ploughed the low-lying Fenlands near the town of Wisbech.
THE eldest in a family of 12 children, Jim knew the austerity of the Great Depression, the suffering of World War II and the gloom of the immediate post-war era, when opportunities for young men were few.
At age 19, he moved to escape the UK and gained sponsorship from a English migrant to work on a farm near Colac, Victoria.
He borrowed five shillings from a cabinmate on the voyage. On an excursion to Perth after his ship stopped at Fremantle, Jim was amazed at retail shelves of chocolates and lollies.
“I had never seen anything like that – we were still on rations in England,” he says.
“I got off the boat (in Melbourne) in the morning and I was milking cows that afternoon.”
Jim saved a deposit on his own patch and ran dairy cattle in the western districts. He also farmed in South Australia before coming to Queensland in 1978.For many years, he entertained South East Queensland children with a range of baby animals in Jim White's Mobile Family Farm.
QUOTING the phrase, “too proud to beg, too honest to steal”, he says he has lived through three farming phases – dairy, sheep and finally beef cattle.
In the Redlands he has farmed at Thornlands and Redland Bay, where he says he has just regained possession of his land after renting it out for a year to horticultural producers.
His ad sought calves to raise while he works to reinstate his paddocks to his high standards of property management.
Jim is determined to keep working the land.
“I don't want to go into a rest home – I wouldn't last long,” he says. “It wouldn't suit someone like me. I've got to keep working and doing things.”
Jim's lively mind focuses on wider issues of agricultural production; he recently spoke on talkback radio about hygienic standards on the fields producing fruit and vegetables.
Thanks for joining me to meet the great people in the marvellous community of classified advertising. This column has appeared in The Redland Times.
Posted by John Rumney at 3:27 pm