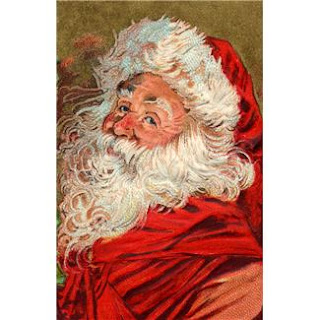 It's catch-up time as I post an accumulation of columns from recent months (image courtesy microsoft:):
EVERY year, as the tailenders in the Melbourne Cup thunder past the post, Australian society starts its crawl toward the annual Christmas shutdown.
That's why it was not surprising in the Classifieds this week when Santa Claus signed a Boats & Marine for-sale notice offering a 4.6-metre Horizon aluminium dinghy with centre console, a 50hp Evinrude motor and "all the bells and whistles".
One of Santa's helpers has been taking the calls. "If you lose your sense of humour you may as well be dead," Doug Jackwitz, 78, said, adding that he had received visits by three "lookers" but the boat was still in the shed.
He estimated the motor would "be lucky to have done a hundred hours" and he wanted only about about half the price he paid five years ago, or $12,000 negotiable.
HIS ad not only indicated the boat condition as excellent with very little use but extended to that of Santa and said, "old age has caught up".
Doug said he needed his sense of humour right now. His wife, Jean, was battling a serious illness and he had been using a wheelchair for about a year since breaking his hip in a fall, so he was unable to take out the boat.
His son, Bill, had also left the vessel idle, so Doug decided it was time to sell.
Bill and his sister, Christine, were of primary school age when the family moved from the Lockyer Valley to a Cleveland property in 1966.
The family grew "strawberries, tomatoes, cucumbers and so forth" for several years until the State Government resumed the property for Cleveland High School, Doug said.
He then bought land at Victoria Point for flower production. Doug said he was still kicking himself for selling the property in the mid 1970s because it later became the site of Koala Park shopping centre.
DOUG said he and Jean hunted for a plot with the right sort of red dirt for flowers and thought they found it at Alstonville in northern NSW. "But the ground was hopeless, so I went into the water drilling business."
The couple returned to the Redlands about 14 years ago and have enjoyed living close to the younger generations of their family.
Doug is delighted both his son-in-law, Simon Walker, and Bill both work for the chicken producer, Golden Cockerel, which has the status of an institution of Redland primary production. Simon's father, the late Harold Walker, had been well-known as the operator of the Cleveland-Dunwich ferry, Doug said.
Santa Claus looks forward to especially enjoying Christmas Day with the Jackwitz family this year.
Thanks for joining me to meet the people in the marvellous community of classified advertising. This column has appeared in The Redland Times.
Posted by John Rumney at 10:26 am