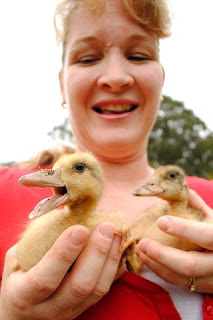 SHE's a country girl at heart after growing up on a Redland strawberry farm but Birkdale mother Diana Trenerry admits her surprise at the appearance of 13 ducklings in her poultry pen. Spike and Speckles – a pair of bantam ducks that Diana says the family bought at a Lismore market as "pets with an egg bonus" – delivered a baker's dozen of the cutest creatures outside the frames of a Disney movie.
THE new parents made sure the Trenerrys shared their delight over the hatching.
“Our drake usually makes noise in the morning before we feed them but on this morning both the ducks were really quacking away," Diana says. "We went out to see what the racket was about to find them proudly parading their new brood for us. We knew our ducks were broody and the mother duck was sitting on her nest but we had no idea her first batch would produce so many birds. After a few days the reality of having so many sunk in. As we have hens as well the pen was going to get very full. "We were so impressed with these tiny yellow birds that we decided others should also have the opportunity to enjoy them."
DIANA advertised a giveaway in the Classifieds and found homes for all the ducklings within days. "About half went to families whose children wanted them as pets and the others to people on acreage with dams; two were even taken to a new home west of Maryborough," she says. Ducks are "undemanding creatures, less susceptible than hens to some poultry diseases", Diana says. "Some duck breeds will outlay hens, and the duck eggs are bigger. A duck will continue laying for a longer period than a hen; ducks do eat more and tend to be messier than hens, but they are also more efficient scavengers and, if they have access to a pond as well as grazing, will find a lot of their own food. Ducks are less destructive than hens which will scratch up every vestige of plant growth if allowed. Ducks will investigate plants for insects and slugs, but will not usually cause damage in a herbaceous border or on a lawn. They do though absolutely love young lettuces, peas and brassicas."
THE pen is enclosed with wire to protect the birds from predators. "Foxes have been sighted and taken chooks from neighboring properties," she says. "I had a muscovy duck taken about 20 months ago by a fox. The two Silver Appleyard Bantam Ducks I have now were to replace her. I expect to have more ducklings from my two ducks in the future. This was just the first batch. I am unsure of how many times a year they will breed." Readers should watch the Classifieds for Diana's next duckling bulletin.
Thanks for joining me to meet the people and other creatures in the marvellous community of classified advertising. This column has appeared in The Redland Times.
Posted by John Rumney at 10:01 am