Roofer on run in wet season 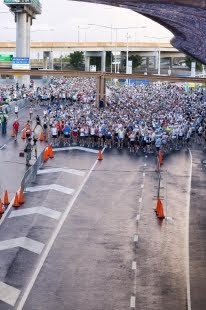 The following column appeared in The Redland Times late February: Image of the tunnel run courtesy www.clem7.com.au/
THE wet season drags on. Those with ageing roofs pray we can get through another few weeks without the sight and sound of drips coming through the ceiling and hitting the floor, presenting one of the most horrific experiences of 'householding'.
Despite the many days of grey clouds and showers, Redland City roofs seem so far this year to be coping pretty well.
Luckily, by yesterday morning at least, we have missed the severe storms that quickly show up the faults 'up top' and keep roof repairers busy.
Victoria Point roof and guttering maintenance contractor Jason Dahler, who trades as Weatherite Enterprises, says business has been steady and he has been grateful for a pretty laidback wet season.
JASON has enjoyed his weekends this year, with sons Lachlan, 13, and Joshua, 11, playing cricket with Faith Lutheran College. The college plays in The Associated Schools (TAS) competitions, so Jason, his wife, Sara, and their daughter, Isobel, 7, have been on the sidelines of many fields around South East Queensland. A drive to Warwick is on the Dahler agenda this Saturday. On Sunday Jason, Sara and Lachlan will compete in the Clem7 Tunnel Run, part of an open day at Bowen Hills celebrating the latest addition to SEQ's transport infrastructure. The Dahlers certainly have an athletic focus; the family has had membership of Bayside Runners for some years. Jason admits that after a hard week's work he usually leaves it to Sara to contest the longer events.
THE trio obviously looks forward to joining thousands on Sunday in the 10km run, which will start and finish at the Bowen Hills tunnel entrance. Some athletes apparently have worried about the tunnel's suitability for such an event. The run website lists among FAQs: "Will it be humid or uncomfortable in the tunnel? Conditions inside the tunnel are dependent on conditions outside the tunnel. There are a number of jet fans inside the tunnel which will be operating to keep air flowing ... Participants will enjoy shade for most of the event. The only areas where participants will be running outside is at the start, at the turn-around point (at Woolloongabba) and at the end of the race."
A LATE-summer downpour should not have much effect on these runners, as Brisbane's new pride and joy doubles as a gigantic covered stadium.If the heavens open and Jason gets an emergency call for a roof repair he'll simply have to say, "Sorry, I'm too busy -- I'm being run off my feet."
Thanks for joining me to meet the great people in the marvellous community of classified advertising.
Posted by John Rumney at 4:29 pm