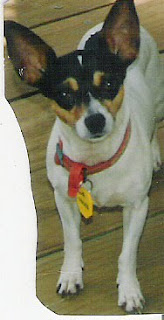 BEN Reid's voice reflected the depth of emotion when he said: "It was like giving away part of myself." Ben was talking about his sadness at parting with his dog, Oscar. Oscar is the nine-month-old fox terrier who featured in the Classifieds Pets & Pet Supplies last Friday as "free to good home". The ad, in which Ben revealed his heartbreak with the words, "reluctant giveaway but desperate", prompted about 40 calls.
"I HAVE to find someone to move into my place and it's just not fair to expect them to put up with a dog in the house -- he is an 'inside' dog," Ben said yesterday. "I wanted to give him to a family but a lady who lives up the road liked him too. She already has a little foxy and she's there at home all day, so that's good for a dog, and we thought Oscar would be good company for her dog. She said, 'Come up and have a look at my place' and I walked into her house and she has ornaments of dogs all around. She loves dogs and she loves him but I am a bit worried. She rang me the other day and said her dog and my dog had a fight. Apparently they were on the bed and had a bit of a bark, so I don't know if they are going to get along. I'll ring her this afternoon or drop in and have a talk about what's going on."
BEN said he had kept the numbers of some other applicants for Oscar, so others on the shortlist still had a chance late yesterday. Ben's a tiler who was born in Darwin, grew up on the NSW north coast and has worked his way "pretty much around Australia". He has lived at Redland Bay about seven years.
DOGS certainly have their own set of rules and manners on their canine friendships. I once thought my dog needed a companion and introduced another dog to the household. Months of agony followed, with the first dog bullying the newcomer 24/7, and making all our lives hell. The new dog was a happy-go-lucky type who seemed to really try not to get in the other dog's way and it was tragic to see him constantly harassed. My older dog would not accept my counselling and show any tolerance.
THESE experiences suggest the canine territorial instinct can overrule a human attempt to create new doggy friendships. Whether there's a solution, only a dog expert could say. Some excellent dog trainers have advertised in the Classifieds over the years. If anyone has ideas on two-dog diplomacy, please let me know. Thanks for joining me in the marvellous community of classified advertising.
This column has appeared in The Redland Times, Queensland, Australia.
Posted by John Rumney at 9:53 am