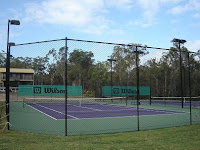 Image from http://www.sheldontennis.com.au/. This column has appeared in the Redland Times, Cleveland, Redland City, Queensland, Australia.
THE bright enthusiasm that reflects from Sheldon Tennis Centre goes a lot deeper than the high-tech purple court surface and the colour scheme it inspired.
The centre has become a vibrant hub dedicated to a great game during the three years since Dean and Sophia Toparis put the covers on their racquets in Sydney and headed north to make a new life in the Redlands.
The couple’s daughters, Barbra and Regina, were only toddlers when Dean and Sophia bought the then two-court Duncan Road centre after managing public courts, mainly in the St George district, for about a decade.
A lot of serves have gone over the nets – including some from Barbra, now aged 7, and Regina, 6 -- as the couple has worked hard to put their stamp on the Redlands tennis community.
WITH backing from Tennis Australia, the centre now has four "grand-slam standard" courts with the purple Laykold surface of Sports Technology, which Sophia proudly says provided playing fields for the Beijing Olympics.
"The company wanted a centre in Australia to display its product and asked us, ‘How about trying purple?’ so we were the first to have that colour," Sophia says.
"Now we have the purple theme right through, with purple feature walls and our newsletter is ‘The Purple Patch’."
She says her husband simply loves playing and coaching on the high-quality surface, about 30 years after he took up the game.
Dean had his A-grade debut while in his teens but in recent years, with a level-two qualification, has been busy helping others.
However, Sophia says he looks forward to rejoining the player ranks in a Tennis Brisbane project to create a stronger community of interest among about a dozen privately owned centres.
THE couple, through our Public Notices, has invited players of all grades to "be part of Brisbane’s largest tennis comp".
Sophia says the rounds will rotate around centres to enhance the experience of representing a community on the courts and the associated social interaction.
The coach doesn’t have to look far for someone to coach him – Sophia has qualified at level one since they came here.
The Sheldon centre is the base for one of the best known names of tennis in the Redlands, Ryan Agar, who earned the tag, "the Mars Bar Kid" after he appeared in a television commerical with former tennis "bad boy" John McEnroe.
SOPHIA has sadly announced Ryan has ended his professional team-tennis campaign in Germany.
"He is coming home after he injured his lower back while training," she says. "He had physio and treatment but felt a niggle when he resumed competition so he didn’t want to risk continuing and expects to back next year."
The good news is that Ryan expects to join his coach, Dean, in guiding the Sheldon players. And even better – Sophia says Ryan is due home before his 21st birthday next month.
Thanks for joining me to meet the great people in the marvellous community of classified advertising.

From sport to music: the following was among the winter 2008 highlights of Classie Corner:
Star trumpeter starts new era
A MILESTONE has occurred this week in the career of a talented young Redland musician.
Tuesday, June 17, 2008, marked the start of a new era for Josh Sinclair, 19, of Thornlands.
The Bayside Bulletin’s Training and Tuition Classifieds featured Sinclair’s first ad offering trumpet lessons.
It described Sinclair as "an experienced local player", rather understating the credits that the former Sheldon College student has notched up in his first decade on the instrument many regard as the star of the brass family.
Josh, who is taking a break from his Bachelor of Music studies at Queensland Conservatorium of Music, must be the envy of many young musos because he has already played with the great James Morrison, not just once but three times.
THE pair first met at a South Australian jazz festival in 2003, when Morrison picked Sinclair from the Sheldon College Jazz Orchestra to be part of his festival ‘superband’ line-up.
Sinclair kept in touch with Morrison, mainly by email, and the reward came the next year, when Morrison invited him from the audience to go on stage at Twin Towns and play the jazz standard 12-bar Route 66.
"I didn’t have any gear with me, so I played his trumpet and my mate, Mitchell McLennan (also then a Sheldon student), played a borrowed trombone and James played flugelhorn," Sinclair says.
"They did a variation in D and modulated to F in the solos."
Next time, Sinclair was more prepared and took his mouthpiece to a Morrison gig on the Sunshine Coast. Again, the world-revered trumpeter invited the teenager to join him on Route 66.
AT the Dingo Creek festival on the North Coast in 2005, Morrison yet again called Sinclair to the stage then they launched into another standard, Mack the Knife.
Sinclair, who won the A-grade trumpet award at a major Brisbane music festival in 2002 and topped the premier grade in 2003 and 05, has already played in the US with the Brisbane All Star Youth Big Band.
The band won a spot at the 2005 International Association of Jazz Educators Conference in California.
Sinclair has been in a latin and salsa groove for a few years, playing with the Gold Coast-based Latinfire.
This week has marked another milestone – his first professional level trumpet, which he has played for the past seven years, finally broke down on Monday.
The broken-hearted muso has had to put a deposit on a new Austrian-made Schagerl trumpet, which has some discerning ears – and lips – to please.
"The trumpet is fun," says Sinclair. "It’s loud and just a bit obnoxious at times. It’s great. I love it."
Posted by John Rumney at 9:28 am