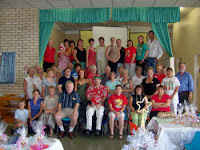 THE 19 years since the few seconds that changed the life of a Royal Australian Air Force corporal in a highway town near his base may help to prove that time indeed is the greatest healer.
But without Daryl Henbery’s determination the much-quoted philosophy for "moving forward" after a proverbial kick in the guts would have led nowhere.
He remembers his motorcycle skidding on a wet road but he does not dwell on the hazy memory of the accident that damaged his spinal cord and made him a quadriplegic.
THE skid one rainy day in 1989 in the Hunter Valley town of Raymond Terrace, near the Williamtown airbase, ended Daryl’s career as an RAAF storeman and left him with only threads of hope.
He regained some arm movement, despite having no hand functions. He could tap a "querty" keyboard and use a "track ball" controller to play computer games because the paralysis left one finger straight.
After a rehabilitation program at Royal North Shore Hospital, Daryl moved to Mackay in 1990 with his parents, Lyn and Alan Henbery.
On a visit to the Princess Alexandra Hospital spinal clinic, Daryl met a nurse, Marian Doherty. The couple married in 1992 and made their home in Cleveland about 15 years ago.
WITH computer knowledge from his initial rehabilitation, graduation from several courses and lots of practice, Daryl specialised in desktop publishing.
After joining the Redland Community Centre team on publishing and administrative support, Daryl was elected to the management committee six years ago.
He is now in his fourth term as president, earning respect as a fine ambassador for the Redland’s helping sector.
Daryl’s military and administrative experience undoubtedly helped set him up to head one of the city’s major volunteer organisations.
He says he is proud to represent an organisation that contributes to the community through many programs and activities, and a volunteer gains the reward of personal satisfaction.
"LAST year our volunteers put in over 6000 hours of unpaid work," he says. "It is these people who are the backbone of our organisation.
"At last count we have approximately 40 volunteer staff who work with only six paid staff. We had 616 client visits for counselling which was taken up by only two family support workers and we provided over 1700 visits for emergency relief.
"We try to promote ourselves not only as a "welfare" service but also a positive place where people can meet or learn new skills."
All the community centre’s office bearers were re-elected unopposed at the recent annual general meeting.
Daryl Henbery verified this account on October 7, 2008, and it has appeared in the Redland Times, Cleveland, Redland City, Queensland, Australia. Thanks for joining me to meet the great people in the marvellous community of classified advertising.
Here’s a flashback to May in Classie Corner:
Disability services find new voice
THE lime green T-shirts that turned heads and made eyes pop on streets and in shopping precincts late last year could have been the fashion statement of the century for an often-overlooked community sector.
Such an in-your-face tactic worked well for a new movement that aims to increase funding for disability services.
The message flashed from chests, backs and shoulders during the federal election campaign after the Disability Alliance formed.
The national alliance of more than 30 organisations included Carers Queensland, Spinal Injuries Association, Queensland Advocacy, Brain Injury Association, Cerebral Palsy League of Queensland, Queensland Alliance and the Endeavour Foundation.
QUOTING official figures that almost eight million Australians are affected directly or indirectly by disability, the alliance pleaded with political leaders to "give people with disabilities an opportunity to participate in life like the majority of Australians expect".
Alliance spokesman John Mayo was blunt in his summary: "Government should be pro-active rather than crisis driven. Disability funding is a national disgrace."
Out on the streets, Spinal Injuries Association information officer Marion Webb was surprised at the number of people who commented on her T-shirt and took time to read the fine print.
Marion, who has worked with the association for 13 years, says she has long had a passion for helping those with disabilities and their families.
The interest extends past her work jurisdictions and to effects of psychiatric and intellectual disabilities on families.
SHE was delighted that a sector that "has not had a lot of political clout" finally found a voice and she is excited that the alliance is regrouping with an expanded brief.
Mr Mayo, who is Spinal Injuries Association community relations manager and advocate, says the movement has been encouraged by its election campaign result, with all the seats it targeted now having a new federal member.
He says the new brief takes the case of disability support funding to all levels of Australian government, not just federal.
Carers Australia has estimated the nation has 2.6 million carers, he says.
The number is soon to grow just slightly after the SIA adevrtised for part-time carers in Wellington Point, Birkdale and Wynnum.
The headline, "Want to make a difference to someone’s life?" certainly sums up the new vigour in the helping sector.
Posted by John Rumney at 10:52 am