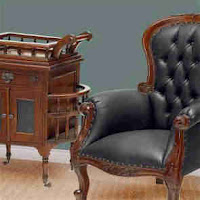 Image from http://www.bazaarfurniture.com.au/.
SIGHS of relief may have echoed around Enterprise Street, Cleveland, when Les McAndrew arrived for his first day’s work with Furniture Traders Australia.
Les has just taken an important position with the firm, which is one of Queensland’s major importers of Indonesian-made furniture.
Manager Joel Towner says the firm’s joiner/cabinetmaker ensures the top quality of the products it sends south Canberra and north to Cairns for retail.
He says Les replaces Peter Todd, who had the job for almost six years.
"Peter attempted to retire a few times and we finally had to let him get away for some rest," Joel says, admitting he was at least a little anxious about finding the right replacement before our Positions Vacant column came to the rescue.
DEDICATION to quality and highly developed skills are necessary for the position, working on a "wide range of fix-up jobs on items mainly of mahogany, teak, pine and oak.
However, Furniture Traders Australia also imports woven products of rattan and other cane, seagrass and bananaleaf, as well as sculptural lines including terracotta.
Joel says the containers of the imports sometimes suffer "a rough trip", leaving minor blemishes on the finishes where the pieces have made contact and breaking glass panels in display cabinets.
He made sure Les could also correct any manufacturing imperfections and even take on locksmith duties if, for instance, a key broke off in a lock.
MOST of the firm’s retail supply goes to the Bazaar Furniture Traders group, with outlets in Coffs Harbour, Logan, Carindale, Morayfield, Bundaberg, Mackay, Townsville and Cairns, Joel says.
However, Furniture Traders Australia also deals directly with customers, meeting all orders through the Enterprise Street head office and warehouse, employing about 10.
Joel says Furniture Traders Australia had its orgins with the Decorators Emporium in the Redlands but the owners sold that retail arm about seven years ago and based a new enterprise in an appropriately named street.
Bazaar Furniture Traders at Carindale sums up the attraction of South East Asian and India
furniture well, saying it has "twists and flavours" and is "a means of inviting the exotic into your home".
IT also reflects the range of imports, promising decorators "everything for the home and garden from water fountains to vases and urns, from romantic teak day beds to sequin-sprinkled cushions and table runners, from mahogany antique reproduction bookcases to one-off ethnic carvings".
Joel says Les is yet to sew on a sequin but has been enjoying his new role.
Thanks for joining me to meet the great people in the marvellous community of classified advertising. This column appeared in The Redland Times in August.
Posted by John Rumney at 12:01 pm