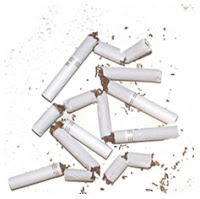 TIMES have changed and the air has cleared somewhat since a young and enthusiastic Bob Possingham slapped on the Brylcreem, shined his shoes, ironed his suit and headed into the Melbourne CBD for an important meeting with some corporate heavies.
Bob recalls the executives were scornful of the proposal he laid on the Australian National Airlines (ANA) table that day in the early 1960s.
He suggested the airline, which later became Ansett, ban smoking on some flights for the sake of all the non-smokers.
"They said they couldn't do that because all the passengers would fly with TAA," Bob says.
ALMOST three decades later, Bob gained some satisfaction when smoking was banned on aircraft, and now - almost two more decades on - he is still working hard against smoking, but focuses on helping, not fighting, smokers.
Bob is the co-ordinator of the Quit Smoking (QS) program, which runs at the Redland Hospital and with sponsorship of the Seventh Day Adventist Church.
He says about 500 Redland people have taken the program during the past 10 years; the most recent follow-up survey showed about 70 per cent had stayed 'off the smokes'.
BOB, now a church chaplain, was a youth director with a health portfolio when, all those years ago, he became a QS champion.
He has never smoked in respect to his belief in "caring for our bodies" and responsibility to "keep them healthy and well".
But he says the program is not religious. It comprises a series of lectures on psychological and medical issues associated with smoking.
DOCTORS who support the program include obstetrician Paul Truscott, his daughter Dr Rebecca Dunn, who has a specialty in eight control, and Dr Denton Wade, who helps the smokers learn about addiction, Bob says.
"Quit Smoking has no dependency on drugs to help people stop," Bob says. "It deals with lifestyle. It is important to understand the triggers for the addiction to nicotine.
"There may be emotional and psychological factors, or other triggers such as certain foods."
Bob could smile briefly at the Classie Corner report last week about the lost carton of cigarettes and the "smoker who lost, or the loser who smoked".
But he says he does not look down on smokers. "I can only say I feel sorry for them," he says. "I know the struggles they go through, wanting badly to give up but being unable."
Quit Smoking will run at Redland Hospital from July 19 to 23 in four 90-minute sessions.

Thanks for joining me to meet the great people in the marvellous community of classified advertising. This column has appeared in The Redland Times.
Posted by John Rumney at 8:07 pm