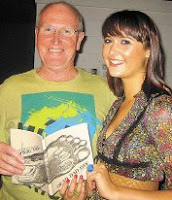 MY long-time mate Paul Dobbyn certainly has packed a lot of living into the past half century or so. He was a journalist with a young family when we met, in our twenties, while we worked in the regional press.
Already, Paul held a university degree and had travelled widely in Australia, worked as a construction labourer and in other jobs before journalism and published his first book of poetry.
During the 1980s, he wrote another book, upgraded his qualifications to become a high school teacher, then took another turn into sales in two of the most demanding fields (door-to-door and advertising), excelling in both.
He has also worked in marketing and consulting in the job network and in marketing and publishing with major public agencies.

THIS summary would be far from complete. It’s just what springs to mind, rather than Paul’s CV, but helps to illustrate forces that have shaped him as a poet.
Out of all that life experience comes a special insight that reflects in Paul’s latest book, Soul Healing Afoot / Dead Dad Bye.
Paul launched the work late last year (more below) and says he later "had the pleasure" of reading to high-flying star singer Mirusia Louwerse the book’s dedication.
Mirusia and Paul have been friends since they were members of a "commuters club" chatting during their trips from the bayside to the CBD.
The dedication says:

Mirusia, my modern muse of the glorious voice who travelled with me by train each week those two years or so, reminding me, challenging me with that inner fire, true inspiration and dedication to artistry bring.

THE reading occurred at "a bash at her parent’s place" after what Paul described as an "amazing story of success for young Birkdale lass as she flies again to top of charts aboard Andre Rieu's record-breaking DVD release from last month's Melbourne concert".
Once a marketing man, always a marketing man, I guess. But the same holds for a poet, and here’s what Paul’s friend, long time Melbourne poet, critic and member of Cathouse Creek - Liz Hall-Downs – wrote at Compulsive Reader:

"Unlike the ranting, raving, populist, (and frequently facile), performance poetry that seems to be springing up everywhere lately, Dobbyn's work is much slower in the fermentation, and deals with some of life's big questions. These are deeply felt, considered, highly-crafted poems about the challenges of middle age, about weathering divorce and rebuilding a life from its ashes, and about facing the death of an elderly parent - but they are not devoid of humour and, often, clever word play. Gemma O'Brien's lovely linocuts relate subtly to the poetry and, combined with the unusual font and off-white paper, the overall effect is of an 'artist's book'.
'Soul Healing Afoot' is the longer sequence, and deals with personal transformation: the poet drives into the desert while contemplating his unknown future; an encounter with a snake's shed skin prompts the lines: '... I knew how he felt, / that snake: / shiny and fresh - slicing through the grass: / chuckling at life's best trick - and gift - of all' .

Rev Anthony Gooley wrote:
The collection is in two books which are bound together in a flip book style one part Dead Dad Bye and the other Soul Healing Afoot.There was a fairly large audience for the reading, standing room only, and we had some great live music in between readings ... I think all of us were so privileged to hear Paul's work and the poetry was amazing. One could not help but be moved by some of the pieces and laugh at others which had some very clever word plays.I am not Paul's publicist nor his marketing director but I can say that the poems we heard yesterday were outstandingly good and I would recommend his book, which is great value at only $20. I for one, am looking forward to my chance to enjoy a closer reading of the material over the holiday break.

ANYONE wanting a copy of Dead Dad Bye / Soul Healing Afoot can email me through this site (see right of page). Paul has sent a link list: Compulsive Reader, myspace, fortheloveoftype, city-south-news.