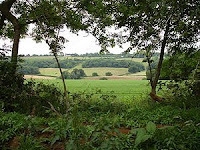 Surrey has some natural air conditioning too, as this picture from wikipedia shows. Today's post appeared one week ago in The Redland Times, Cleveland, Redland City, Queensland, Australia.

A REFERENCE somewhere in the history books may note the beads of sweat on Captain Arthur Phillip’s brow as, in the middle of a southern summer, he presided over the raising of the Union Jack to claim, in effect, the island continent for Mother England.
Imagine the whispers among the assembled soldiers and convicts, suffering the colonial heat.
"Here he goes again -- wouldn’t you think he’d cut the waffle and let us get out of the sun?"
The Sydney Cove ceremony on January 26, 1788, started some sticky centuries for "cold-blooded" English folk but it must be acknowledged that many revel in our warm to hot summers.
SURREY-born Wayne Fullard’s introduction to Australia followed that of Phillip’s First Fleet by 211 years. That was in 1999, and a further 10 years on, Wayne gets a bit sentimental as he says: "I just fell in love with the place."
Wayne, an air-conditioning engineer who specialised in retail centres and shops in the London region, has never feared a hot day.
He had several stints "down under" before another love bug bit in a Cleveland restaurant in 2003, when he met the Brisbane-born woman he would marry in 2006.
Ella Fullard has devoted her administrative skills to helping Wayne build his business from a home base at Alexandra Hills.

THEY had a busy 2008, with major projects including a new Endeavour Foundation centre at Toowoomba, as well as many smaller commercial and domestic contracts.
The couple had a hectic festive season. Their marriage created a combined family with five grown-up children and a growing band of grandchildren, now numbering four.
Of course, the stream of visitors from the UK has been steady. The Fullards farewelled the last of the current bunch on Wednesday when their friends, Eric and Wendy Holmes, boarded a plane back to London.
Another friend is due next month, then Wayne’s son, Lee, and his girlfriend Kate, will arrive in April.

THE UK visitors come here with confidence in Wayne’s ability to cool down a hot day; back home, they can call on Wayne’s elder son, Dean, who now runs the Surrey business.
There have been no First Fleet-style grumbles from the Londoners whom the Fullards host.
"They all love the Redlands area – they think it’s beautiful," Ella says.
On the development of the business, Ella and Wayne thank Brian Forsyth, Santo Coco, Neville Wright Barbara and Tony Wills, and "our wonderful children", Sam, Leah and Zena, all of whom have contributed along the way.

Thanks for joining me to meet the great people in the marvellous community of classified advertising. Wayne and Ella Fullard advertise in the Trade Services section of The Redland Times Classifieds.