Investment to some, gamble to others - that's 'super' 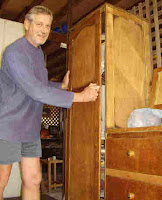 Images - The Rumney brothers at Mowbray Racecourse, circa 1960. They are, from right, Percy, my dad Gil, Reg and Jack; and that’s me with an old wood robe (just in case you are as easily confused as me, this link from the archives keeps the current post at the top of the page, so scroll down for more on the silky oak wardrobe).

MY old uncle Percy had a quaint term to legitimise his fascination with thoroughbred horses.
He spoke of each donation to the bookmakers as an "investment", rather than a "bet".
Percy died poor.
This sad tale has a modern sequel after the nation’s superannuation savings – from two decades of garnishment of wages – have taken a battering in the stock market, which is "investment" to some and a "gamble" to others.
I wish Percy and maybe some modernday superannuation managers had talked to Bob Metcalfe, who represents what he says is one of the safest investments.
BOB, his wife, Dianne, and her dad, Merv Alley, worked feverishly for most of the last half of 2008 to set up a shop in Bloomfield Street, Cleveland.
But Bob and Dianne are not selling financial packages or dispensing money-management advice. Their business is Bayside Antique & Collectables Centre, which occupies a former service station.
"Good antiques and collectables will never go down in value," Bob says. "They only go up -- something like 11 per cent (return) a year for a good quality item, such as a Victorian gold chain or an 1880s Australian-made cedar chest of drawers."
The Australian Government in fact has sanctioned investment in antiques, collectables and fine art for superannuation purposes, subject to its conditions, Bob says.
THE couple searched hard for the right Redland premises. The trio toiled for about two months on major renovations of the old garage before they picked up a paintbrush.
The premises now provides about 650 square metres for about 20 independent dealers. Bob says customers will always find a wide range of items.
Antique cameras, retro and vintage clothing, jewellery and furniture for different tastes are among features.
The shop opened as the financial crisis bit, but Bob says the gloom has not affected business: "We are doing better than we thought we would."
Which seems to indicate the strength of the "antique economy".
IN the nature of the write-offs on financial articles, I must ask readers to seek independent advice before buying anything for investment.
But even browsing collectables and antiques is enjoyable. And who knows? You may spot something that has been undervalued.
Bob says a Brisbane man several years ago bought for a few dollars what a dealer believed was a Albert Namatjira print – the painting was valued at $30,000.
Now, I remember, old Percy had a few old prints …
THANKS for joining me to meet the great people in the marvellous community of classified advertising. This column has appeared in The Redland Times.
FOOTNOTE: It is a special pleasure for me today to publish a picture of the man who, with my mum, Jean, introduced me to the marvellous community of classified advertising when, all those years ago in the summer of 1955, they placed a notice announcing the birth of a son. Those who are disrespectful of classified advertising may note this significant cultural relationship and that a big chunk of the population has had a similar start in life. The proud tradition continues (Classie Corner archives). For an example of such disrespect, read what Geoff Brooklyn of Sydney had to say on the News blog. I can only wonder why Geoff would bother and I must suggest he stops and thinks before putting out his claws.