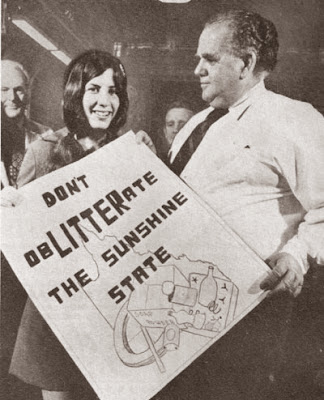 Image: The late Russ Hinze spreads the anti-litter message in a picture from the Keep Queensland Beautiful archives.

THE fast-food industry could have copped a veiled backhander when a recent notice in the Classifieds sought a "fit person" for an important job. The effect of fast food on the Redland community is a pet subject of the businessman who placed the notice to recruit a new worker for his busy team. Bill Tincknell, however, makes no comment about the spreading waistlines and the much-publicised effects of poor diet. Rather, he has another 'w'-word in mind – the waste that litters the roadsides. Bill and his wife, Gina, head two firms that have Redland City Council slashing contracts. He says he is disgusted with the "explosion" of litter from fast-food wrappers over the past decade.
-
"IN my honest opinion, the fast-food industry has a lot to answer for," Bill says. "When we started with the council's contracts there were hardly any [wrappers] but now we take tonnes and tonnes of them to the Birkdale waste facility every week, and 80 per cent of it is from three big oulets." The Tincknells' firm, Bayside Slashing, employs two workers to pick up roadside garbage in front of its tractor-towed slashers. Bill's phone ran hot with 26 applications in a few hours after the paper came off the press with its fit-person call for one casual worker.
-
THAT is a bit of a telecommunications traffic jam in the management of a fleet of tractors, but Bill was pleased that at least no callers accused him of discriminating against the unfit. Born in Papua-New Guinea, Bill says he followed his parents after they settled on Russell Island in 1972. While Gina taught at the island school, her husband skippered a southern bay water taxi for five years in the 1980s. Bill recalls how the boat work allowed him to start a business on the land. During the 'seven-days-on, seven-off' rosters, he operated the tractors of the late Ron Pointon, then one of the island's biggest landholders, and eventually bought Ron's two tractors. Bayside Slashing and Russell Island Slashing now run 30 tractors and have a staff of about 20.
This column has appeared in The Redland Times.