Tale of special cat and the value of love and prayer 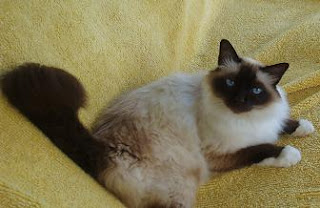 A DEEP sadness gripped Judy Gross, of Mount Cotton, while many thousands celebrated Australia Day. It was the sixth day since her cat, Sonny, went missing.
The eight-year-old desexed male escaped from his run on Friday, apparently into the house, past Judy's husband, John, and out an open door.
Sonny has been an important member of the family for almost eight years. Judy bought him in 2002 for her son, Craigie, who had depression.
THE handsome Birman fretted after Craigie's death in 2007. Judy and John took Sonny to their relatives in Canberra, but the grief-stricken cat rejected human attention, ate barely enough to keep himself alive and upset his carers with a nasty new habit of spraying in the house. He stopped purring.
"We saw him in Canberra last April and were shocked; he was a very unhappy, sad and angry cat and he was a bag of bones," Judy said.
"In June the relatives rang to say, after two years and 10 months, they couldn’t do any more for him and were going to give him to RSPCA Canberra, but John insisted he come home to us."
The couple picked up Sonny at Brisbane Airport. Judy immediately felt the cat was giving back to her a part of the great loss she suffered from Craigie's death as her son and his pet were inseparable for five years.
EVEN so, the cat growled and snarled at the couple and refused to eat for four days.
With veterinary advice, the couple put Sonny on antidepressants for two months and gave him "24-hour attention and love".
"It took four months before we heard him give a little purr and he even put on half a kilogram," Judy said. "I also felt more settled so we did each other good. He never wandered and spent his days in the shed or garage watching my husband fix stuff.
"He was much too contented to walk away. We find it bizarre that he has just vanished."
Last Friday Judy walked from 4pm to 10pm, calling his name until sobbing and exhaustion forced her to give up.
JUDY spent much of Australia Day visiting an elderly aunt in a nursing home. But her fears for Sonny haunted her; she wondered where he was and blamed herself for leaving the laundry door open. She prayed for a miracle.
That evening, the phone rang. Sonny had been found at Macgregor and traced through his microchip. Judy shed tears of happiness as she set off to pick him up.
Thanks for joining meet to meet the great people in the marvellous community of classified advertising. This column has appeared in The Redland Times,
Posted by John Rumney at 8:58 pm