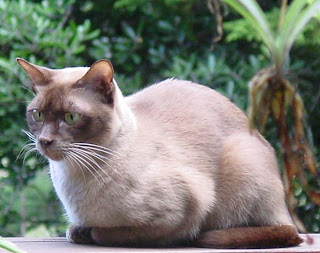 THE potentially heart-breaking experience of giving away a much-loved pet cat became heart warming for Birkdale's Marja and Lawrence Opperman. Marja and Lawrence worried about the fate of the desexed 'chocolate-point' Burmese male, Lewis, for many weeks as they organised their affairs and put their their home on the market to allow them to travel. As she prepared a classified advertisement offering Lewis free to a good home, Marja prayed for the ageing and deaf cat which was suffering a bout of the flu.

THE Oppermans owned Lewis about a year after he was advertised as a giveaway in Logan City. "When we picked him up we were told he was about 12 years old and he had been neglected," Marya said. "He was skinny and had patches; he had no whiskers. But he was a fantastic cat. He was very sweet and very good natured. He started purring as soon as he came near you. It was a rescue mission but I have had cats all my life – I stabilised him and his diet and got a vet to look at him."

MARJA said Lewis became "part of the family" as she nursed him back to good health. He loved to sit on her shoulder. A Jehova's Witness, Marja said: "I prayed and prayed: Please let him go to a good home that gives the attention he deserves, maybe with someone in a wheelchair." On the day the ad appeared, the first caller was a woman who said she had suffered a stroke, was paralysed on her left side and now needed a wheelchair. "I told her that he was old and deaf and had been sick but he was sweet and loved attention, and she said, 'That's just what I want'." Marja and Lawrence delivered Lewis to the woman's Victoria Point home that afternoon. "She was so happy she burst into tears – it was very emotional," Marja said. "She offered us a cup of tea and she called herself his mum." I think she will suit him and he will suit her perfectly. Her carer also seemed to think it was a good match up."

MARJA said Burmese cats seemed to have long lives. She owned one of the breed for 20 years from its kittenhood.The Oppermans, who have lived in Redland City for the past 13 years, plan to see some more of Australia. With Lewis's future now secure, they are plotting a route that will include visiting friends in Cooktown but still have more preparation to do before they hit the road for the trip of a lifetime.

This column has appeared in The Redland Times.
Posted by John Rumney at 4:33 pm