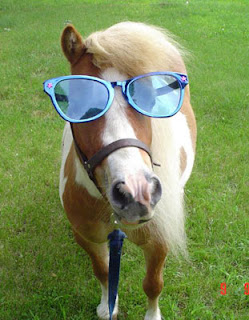 Thanks for joining me to meet the great people in the marvellous community of classified advertising. This column has appeared in The Redland Times. Image shows another miniature horse (courtesy theminiaturehorse.com).

THE cute creature that won Tony Castelli's heart just a few weeks ago still has him cooing with deep affection. But Tony has realised it's not the right time and place for him to own a miniature pony, so he needs to sell the three-year-old chestnut mare, Jasmine. The decision to place the notice in the Classifieds this week was hard for Lancashire-born Tony, who generally prides himself on his good judgement after 34 years in business in Queensland since he migrated from England.

THIS time, he has had to admit that his emotions ruled and he made an 'impulse buy' after he fell in love with Jasmine at first sight."I just don't have enough grass here," Tony said from his small Thornlands acreage property. "She needs to run around in a big paddock. "The ad said "cute as a button, very intelligent", but Tony said that was an understatement – the horse was "almost human", sticking her nose into his tea mug in the morning and trying to get a nip of port in the evening. Jasmine found her way into Tony's downstairs pool room and had a game with the red balls, and she showed mechanical skill, selecting sockets from his toolbox.
TONY grew up on a farm in the north of England and has owned full-size horses. He first thought Jasmine would be good for his two-year-old granddaughter, Jorja, but had to acknowledge the child was too young for a horse, even a miniature. He is grateful to Jasmine for introducing him to "the lovely people" at the Pinklands-based pony club, from which he sought advice. "When I took her down there, she fancied a big Arab stallion and I had to tell her, 'Sorry but he's out of your league'," Tony said. As the venture into horse ownership unfolded, the miniature proved herself to be out of Tony's league. Still, he marvels at how the local schoolchildren call "Jasmine" as they pass the Dinwoodie Road property. He said she had so much personality he would be very sad to see her go, and his wife Nerida, daughter Jo and Jorja would be more so.
TONY started training Jasmine to pull a sulky that he hopes the new owners will take in a package deal, with the two at $450 each.Tony, who was an award-winning master butcher in England, said he had made many good decisions on buying and selling – he went on to own 21 businesses in Queensland. He is busy improving his Thornlands property, which unfortunately is too small for Jasmine.