From Durban to Capalaba 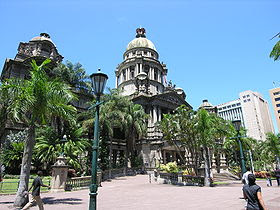 Image of Durban Town Hall from en.wikipedia.org
THE south-east Queensland climate attracted the interest of a young South African toolmaker when almost three decades ago he looked for the right place to build a new life for his young family.
Graham Easterbrook was working in the port city of Durban, where he had grown up. He wanted to ensure his wife, Kathy, and their two infant sons, Justin and Gareth, had the security of a new homeland.
In 1981, Graham, then 25 years old, looked at migrating to Australia and found his toolmaking qualification was in demand.
He came to 'test the waters' and then settled his family at Victoria Point, where they lived for three years before the couple saved a deposit on their own home at Alexandra Hills.
GRAHAM and Cathy had another two sons, Kyle and Ashley. In 1988, Graham set up a business, The Machine Shop, in Neumann Road, Capalaba.
The couple celebrated the birth of their first grandchild in 2006 when Justin and his wife, Kristy, had a daughter, Natalie.
Justin is now aged 31 and working in information technology; Gareth, 28, specialises in window, blind and awning installation; and Kyle, 22 and Ashley, 20, are taking the same path as apprentice plumbers.
Ashley was the "hardworking, competent and reliable" third year apprentice who advertised recently in the Classifieds' Positions Wanted column.
Graham says he will never regret the decision to bring his family to "such a good country".
"I haven't had any disappointments over that – never," he says.
Graham says other family members have come to visit over the years and liked the Redland lifestyle so much they have returned to stay.
LIVING in Honeymyrtle Court, Capalaba, for the past two years, the Easterbrooks still have their two youngest sons at home.
Graham is proud of his business's claim as one of the leading precision machining engineering companies in Brisbane, using the latest equipment and machinery "capable of catering for all metal and plastic engineering needs".
He is confident of taking on just about any machinery component porject with equipment including computer numerically controlled (CNC) lathes.
Sadly, he says the growing trend for such work is offshore sourcing, from countries including India and Thailand.
Despite his pride in his own profession he is also happy to know his sons have shown their independent thinking in following their own paths in life.
That, after all, was the reason he and Cathy came here.
Thanks for joing me to meet the great families that are part of the marvellous community of classified advertising.This column has appeared in The Redland Times, Queensland, Australia.
Posted by John Rumney at 8:55 pm