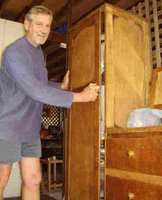 An old wood robe that was a bargain at a garage sale is today’s VIP guest in Classie Corner. Garage sales and classified advertising go together like Araldite part A and B, reaching maximum strength every Saturday morning in the pages of local papers everywhere. My creative spirit tried to make a similar bond between wood and technology. These inspired ramblings make their public debut here …