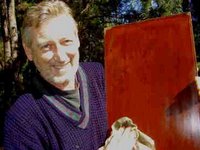 My humble apologies to readers waiting for the promised stories about cedar. But here we go, The Classie Corner Archives are open again. Here’s a cedar lovers’ saliva-drenched column from the Lismore district a few years ago. The picture shows a panel from an old courthouse cabinet which receives a mention.
A CEDAR table for $26. It sounds like the bargain of a lifetime.
But in the 1960s Ian Bennetts thought the price of the "dirty old table" was "a bit rich".
"At the time I thought I was being ripped off," he said.
Ian has just moved from Lismore to Goonellabah, high on a ridge on the Alstonville plateau, so has had cedar on his mind.
His house has a northerly aspect toward the border and he speculates that the cedar in the table came from the "thick dense rainforest" of the plateau.
"That’s where the big cedars used to grow," he said.
All those years ago, Ian found an intriguing stamp on the old cedar table.
It included the letters "HN" and "VR", a crown and a date, July 1881.
"The ‘HN’ would have been the initals of the person who made the table," he said.
"There were only two or three making these sorts of tables at the time.
"The ‘VR’? Victoria Regina, and you can guess who that was."
Ian, his wife Beverley and their three teenagers have been using the table in their family/breakfast room.
They have decided to part with it because their new home does not have the space for such a grand piece.
Ian has a special feeling for history from the last century. He says Banjo Paterson wrote in The Man From Ironbark about his Victorian home town.
Ian’s grandfather was a miner in the Victorian goldfields near Bendigo.
Ian and Beverley came to the district from Hong Kong about 20 years ago.
They started the Thrifty car rental outlet in 1993.
Back to the table. Ian has identified it as "ex-Colonial Govt office".
The proud owner of some cedar from a dismantled cabinet that came from an old Blue Mountains courthouse, I can admire this grand timber for hours.
Ian says the couple has six chairs that can go with the table. They’re possibly tassie oak.
He advertised the table at $1850, which makes the $26 sound pretty good, even if it was a week’s good pay more than 30 years ago.
Posted by John Rumney at 10:57 am