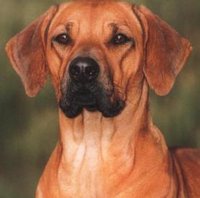 Yap yap. It’s the Year of the Dog in Classie Corner. The glorious celebration continues with today’s post from the Redland Times, which serves a lively community in Redland Shire on Moreton Bay, the shimmering entry statement for Australia’s new economic star, south-east Queensland.

DOGS come and go in the marvellous community of classified advertising but the spectre of one hound is destined to keep returning.
A proud old rhodesian ridgeback has been watching from doggie heaven as a business that took his name has grown from its Redland Bay base.
Dr Chet’s Pet Care Products now looks to take its war against Queensland itch and other ticklish animal problems to the world.
Elizabeth Leane, who took over the business in February, hopes to export the six-product range to New Zealand then to other countries including the United States.
She is the stepdaughter of the business founder, Ken Inman, a former building worker who became interested in herbs about a quarter of a century ago through involvement with a naturopath.
Ken realised the potential for herbs against Queensland itch, hotspots, fleas and flies in the 1980s, when his shetland sheepdog, Mickey, had summer itch.
After the first success, Ken worked on the project for years, patenting a herbal mix in 1994 and gaining official registration.
Elizabeth is grateful Ken is teaching her the business.
Highlights of the changeover include the Redlands’ retention of the "head office".
Elizabeth, who attended Redland Bay State School, proudly tells how her great-grandfather, William Muller, was the first white baby born at Redland Bay. The year was 1876. William died at age 99.
A new generation will grow up in a house that is being built at Redland Heights for Elizabeth, husband John and their daughters, Isabella, 4, and Zoe, 2.
"Like a lot of mums, I needed a job I could run from home and I have worked a lot in community pharmacy so the two things have come together in the business," Elizabeth said.
The production is now done in Noosa Shire, but Elizabeth expects to find suitable Redlands premises if a change is necessary.
She believes the world is ready for the anti-itch treatment system that includes the soothing, antibacterial and anti-insect qualities of ingredients such as aloe vera and coconut and tea-tree oils.
The treatments are designed for the size range from chihuahua to horse.
Pawnote: Dr Chet, who belonged to Elizabeth’s brother, Jason, died in 2001, aged 10 after an itch-free life during the business’s development.
Posted by John Rumney at 11:29 pm