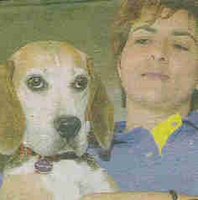 With great pleasure, I introduce to the worldwide web today a marvellous woman who seems to come as close as humanly possible to understanding humankind’s greatest pal, the dog.
Canine stories abound in the marvellous community of classified advertising but Dee Scott and beagle Phantom’s story is special.
Dee grew up in Cooma, New South Wales, Australia, and at age 13 trained her first dog, the family german shepherd, Sheik.
By the time Dee was 16 she was instructing with the Cooma Dog Club.
She later moved to Canberra and Melbourne, all the time training privately and with clubs. She has been heavily involved in the dog sport of flyball.
Dee and husband Neil moved to Thornlands, Queensland, several years ago.
Dee’s career highlights include bringing a mistreated heeler-cross back, Isaac, from the brink of "incurable" and she still enjoys the company of the lifelong friend.

HUGS and sniffles are hallmarks of a reunion but pats and sniffs were the order of the day when a newly retired federal agent met up with an old mate in the Redlands.
The officer had just ended a star-studded career with the Australian Quarantine Inspection Service in Melbourne.
Celebrated sniffer, Phantom, a beagle with the rank of Quarantine Detector Dog, checked more than one million passengers in almost a decade of service at Melbourne Airport.
After leading hundreds of "busts" for quarantine infringements, Phantom has finally retired to the home of his first and long-term handler, Dee Scott.
In 2004, Dee moved to Thornlands, counting off the days until Phantom’s retirement and their reunion.
"I was teamed up with him as a pup when I joined the service in 1998," Dee said.
"He’s a brilliant dog; I have his whole CV; he has had huge career.
"He was not trained for narcotics but to protect our agricultural industries, which contribute so much to our way of life."
Phantom had found his share of plants sewn into clothing and unexpected nasties like forgotten sandwiches in luggage but the big sausage bust stood out among the achievements, Dee said.
He had sniffed out a stash of 5.5kg of salami and sausages, clumsily disguised with a layer of chocolate, in a golf bag.
Dee, who has a business, Positive Response Dog Training, said the partnership with Phantom had highlighted her 25 years of training dogs and her belief in positive, rather than negative, reinforcements to gain the right behaviour.
"You cannot make a dog like Phantom go out and sniff when you want them to unless they are happy," she said.
"Dogs have a unique language; we don’t speak dog and they don’t speak English.
"People tend to humanise their dog’s attitudes but they should try to look at the world through their eyes."
Dee said dogs must also socialise with other dogs to help their training.
This is a message at Dee’s "Puppy Preschool", which she runs at Raby Bay Veterinary Surgery.
She also trains through Redlands Veterinary Clinic, Thornlands, and gives private consultations.
Phantom has had a lot of socialising since he first swaggered into his new home.
He was able to match a certain smell Dee took with her to work all those years, that of her heeler-cross, Isaac.
Dee reckons the pair virtually would have known each other already.

I spotted an ad for Dee’s "Puppy Prechool" on the Redland Times popular, Classifieds Fast Find Page. You can find Dee on 07 3821 6996 or 0424 058 450.
Today’s Times published the column with an upfront pointer. I have scanned the pic from the paper. It appeared with these words:
Television viewers may recognise the bloke with the long ears pictured with Thornlands dog trainer Dee Scott.
The beagle, Phantom, has featured on the Seven program, Border Patrol, as a star quarantine detector dog in Melbourne.
He has just retired to live with Dee, who was his first handler. The story features at Classie Corner in today’s Times Classifieds.
Posted by John Rumney at 10:03 pm