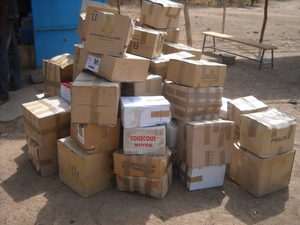 Image: Cartons and cultures - from Friends of African Village Libraries.

YUK. That's the quick way to sum up the task of moving to a new address. Now a slower way: It's a subject that everyone seems to dread and certainly would get more thumbs-down clicks than the carbon tax on an internet forum. Chaos rules when moving, no matter how much planning has gone into the 'big day'. There'll always be clashes in normally tranquil relationships as spouses wrestle with heavy objects. It's in the script: She tilts one way while he twists the other, and Newton's law jumps out of the textbooks into painful reality – gravity is fearsome.
A TABLE leg will scar a wall or door; a dent will mysteriously appear in the fridge door; the removal truck will be either early, which creates destabilising urgency and risk of panic, or late, which instills fear of blowing the schedule. A comforting thought for some: Removalists, whether 'good' or 'bad', can be blamed for just about everything that goes wrong. A mate with a truck started doing removals but gave up saying he couldn't handle misplaced blame for damage and losses, and some overbearing master-servant attitudes.
ON my last move, in the cool of the early morning before the sweating and groaning, I called aside the removalist and offsider. Their eyes rolled in agony as I began: "Now, I want you to understand the cartons contain some very important things." Feet shuffled. "I want you to take special care. One of those boxes contains my tax records and I need you to lose it." We got on fantastically after that. They welcomed me to the cabin for the trip and the driver shared personal thoughts and details, including how, as a teenager, he had climbed through the bedroom window of the girl next door in the dead of night and fathered a child. And he explained the beliefs that ruled his life in a population infiltrated by little grey alien men in human skins, pulling strings in people's lives and fiddling in their affairs.
EVERY move offers its magical moments and memories. But today, here's some serious advice: Don't throw out good gear because you run out of bags and cartons. Always get more cartons than you think you'll need, and take everything for a garage sale at your new abode. With a sore back, you'll need the money for painkillers. Removal cartons are available through our For Sale column and the Garage Sale column is the definitive guide to the Redland City bargain hunt.
This column has appeared in The Redland Times.
Posted by John Rumney at 10:15 am