Jewels shine among junk but misfortune can lurk in shadows 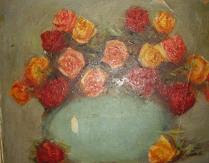 ﻿﻿﻿﻿﻿ Image: This delightful oil painting is a special treasure someone I know well found at a garage sale a few years ago.

﻿LIFE can be one big treasure hunt so the reality television focus on antiques and 'jewels among junk' is bound to captivate many viewers.
The British do it with dignity, showing courteous assessment of objects presented to experts in the relevant field. Across the Atlantic, brash Americans comb through 'junk' with manic drive.

THE treasure hunt is not the invention of TV producers; it has been under way as long as humans have had hopes and dreams. An ancient Arabic parable tells of a little boy who found a jewel, put it in his bag of special things and lived in squalor, eventually dying as an old man, with the jewel that could have changed everything still tucked away at the back of a cupboard.
Recently, after seeing on TV how a UK woman found a medieval ring worth many thousands of dollars in a paddock, I heard how just a few years ago a Redland woman found a $20,000 diamond in a bag of buttons she bought from the Chandler markets.
Last week, a mate bragged about finding a pure gold trinket at a Redland op shop. He paid $1.
USERS of op shops, community markets, garage sales and classified advertising know the adrenaline hit of spying a bargain. Sometimes dreams come true but for every finder there's probably a loser, too.
After I had a garage sale a few years ago an elderly woman knocked on my door to ask if we had found a ruby that was missing from her ring; she visited about 12 sales that day – a costly treasure hunt, indeed.
A recent Lost and Found notice sought "the lady who accidentally put a box of collectables in with her donation to Save The Children Fund", which has a shop in Queen Street, Cleveland.
VOLUNTEER Marion Clarke says she was managing the shop when the woman went in to ask about the box.
When told it hadn't, the woman left without leaving contact details. "About a week later I was cleaning up and came across a box mixed up with the rubbish," Marion says. "I put it to one side to open it later."
Marion is not giving away clues about what she saw when she eventually opened the box. She has already taken a call from a woman who appeared to be 'fishing' for details.
"I simply would like to get the box back to the rightful owner," she says. Marion says the contents date from the early 1900s and are valued at probably $150.

Thanks for joining me in the marvellous community of classified advertising. This column has appeared in The Redland Times.
Posted by John Rumney at 7:19 pm