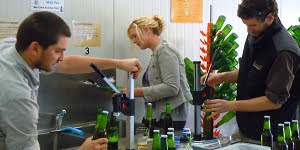 BEER lovers in some swank eateries – as well as pubs and clubs – will soon toast Redland City as the home of a range of premium brews, if all goes to plan for pastry chef-turned-brewer Jeffrey Fleck.
Jeffrey has applied to the authorities to increase production at the Shore Street West, Cleveland, “micro-brewery” he set up last year.
Approval would be a step toward putting Red Bay Brewery products on tap beside the 'big name' brews.
The brewery's annual production limit would rise, allowing product delivery in commercial kegs.
The Office of Liquor and Gaming Regulation placed a Public Notice advertising the licence application.

JEFFREY is already known as a pastry chef who took his knowledge of yeast to a new level after he developed a trade in more than 200 beer styles.
He says a love of beer runs in his family; when he was a boy he helped his dad brew in the family home at Bankstown in south-west Sydney. Naturally, when Jeffrey got old enough, he also helped drink it.
An apprenticeship at East Sydney Technical College as a pastry chef almost 30 years ago started his first career which took him into retail management and resorts but he tired of overnight shifts and hot ovens.
Living at Mount Gravatt with his wife Saori, Jeffrey looked at his options and found a North Queensland boutique brewery for sale.
"We gutted it of all the equipment and set it up here (in Cleveland)," he says. "But it was a long hard process of jumping through hoops to get all the approvals and the work done."

RED Bay Brewery's current licence allows it to sell 50-litre batches, the equivalent of six cartons, in each order, Jeffrey says.
He estimates a $20 a carton saving for customers who seek an equivalent to popular premium brews.
But Jeffrey says he can even cater for customers with a taste for lesser known upmarket beers.
He counts among his achievements the development of his own brews, including a Japanese-style full malt lager, a "big flavoured" pale ale and a gluten-free brew, for which he is seeking endorsement from the Coeliac Society of Australia.
For the latter, Jeffrey says he sourced a US malt with a maximum gluten content of 20 grams per million.
"I've had the beer independently tested and it has less than 3 grams gluten per million," he says.
Watch for the launch of the brand name that Jeffrey hopes to announce soon.

Thanks for joining me to meet the people in the marvellous community of classified advertising; this column has appeared in The Redland Times.