IMAGES: The sort of lodger who would make you call the bank and say, "You can have the house." He featured in a classic Hitchcock thriller (courtesy British Film Institute). Right: The 2001 report on how classified advertising helped an unusual business. 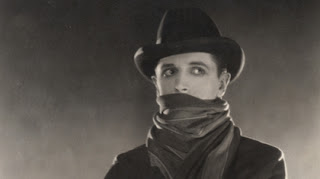 THROUGHOUT a long history of service to readers and advertisers, classified advertising has always offered ways to raise or save cash, whether for spending on luxuries or meeting bills.
After last week's article about the Redlanders suffering mortgage stress, I looked for ways the Classifieds could help ease their pain.
Many such families undoubtedly are placing notices in the Accommodation columns, with about 40 listings from the Rural Press bayside newspapers featuring at http://www.baysidebulletin.com.au/

TAKING in a "boarder" or a "lodger" to share the expenses has probably been around as long as mortgages and rent.
Nowadays, people usually refer to their "house mates" but the result can be the same: the regular weekly income that will keep the bank or the rental managers off your case.
Not all the advertisers are in any state of desperation, of course, but sharing accommodation obviously is a common financial solution.
The notices represent the spread of Redland suburbs, with the exception of the southern bay islands, which were in the mortgage stress zones listed in last week's Classie Corner.

THE most notices have come from Wellington Point, but Capalaba and Cleveland both have a substantial presence, with addresses at Alexandra Hills, Birkdale, Raby Bay, Mt Cotton, Sheldon, Thorneside, Thornlands, Victoria Point and Redland Bay also available.
The cheapest option was $130 a week to share a three-bedroom house at Cleveland, and the most expensive, $220 in a four-bedroom house at Wellington Point.
But share accommodation is not the only "house saving" option in the Classifieds. A browse through any edition will show the enterprise that plays an important part in people's lives.

IT is 10 years since a poignant story of resourcefulness featured in Classie Corner: that of "the manure man".
He was aged in his seventies and advertised from time to time, offering bags of horse manure to home gardeners.
"I have never been short of a quid," he told me. "Whenever I need money I go around the horse properties and bag manure, and take it to the markets. I put the ads in, so my regular customers will know I have a supply."
He said he had started the enterprise when just a boy growing up in an inner Sydney suburb; back then, horses were still common transport.
How's that? Seven decades of survival, transforming waste into a product and using classified advertising to grow the business.


IF you need ideas, just browse classified advertising. You will see what enterprising people are up to and you may find your own financial solution.


Thanks for joining me in the marvellous community of classified advertising. This column has appeared in The Redland Times. Footnote: It looks as though anyone wanting to read the 2001 story will have to print it as my editing gear has limited the quality.
Posted by John Rumney at 9:30 pm