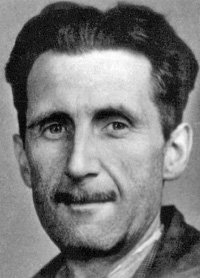 Eric Arthur Blair (1903-1950), better known by the pen name George Orwell. Pic and details from wikipedia.
WRITERS who are brave enough to parade their thoughts on the public stage know that what is unsaid is often just as important as the facts and opinions that they find, construct and often embrace.
Imagine George Orwell, for instance, now sitting at the big typewriter and watching how the literary world has delved so deeply into what made the writer tick that the things he did not say are more important than others he articulated so well.
A tome in the local library about a hero of so many millions of readers soon felt my thumb and forefinger. It offered a comprehensive analysis of Orwell, promising to make advances after other attempts.
The analyst unleashed brilliant power and academic discipline on gathering evidence of this and that, here and there. But this time my library loan quickly went back through the scanner, relieving me of the burden of having it anywhere in my gaze.

NOTHING can give a reader more satisfaction than snapping shut a book for whatever reason. The explosion of air between the pages may be a great reward in triumph at sharing a point of view as much as any disagreement with the contents.
This time, the spouse-waking wham sprang from something between sadness and disgust. There was anger too.
Why can’t the world be left to judge Orwell on the words he wrote rather those he didn’t?
Undoubtedly, it’s the same for many great artists and writers. Someone will always try to make a living from shuffling through the little details looking for things to comment on. Like a forensic pathologist picking through the innards of a corpse.
The sharp scalpel on Orwell was tantamount to a big brotherish payback that must rate among the greatest ironies of history.

A VOICE that is threatening simply by its dullness and dispassionate façade echoes through time:
You can’t keep any secrets from us now, George. We will know everything about your life. All your sufferings, all your failings. And we will parade your guts for everyone to have a peek, so they will know what makes you tick. If we can’t do it while you are alive, George, we will do it after you die. We won’t allow the world to enjoy your brilliance for its own sake. We can’t fault your writing, George, but we will carve you up and hang up the pieces. This is your reward for allowing us into your life.

NINETEEN-Eighty-Four came to mind because of a phone call from a man who featured in Classie Corner some years ago, simply because he had placed a classified ad in his local paper.
I called him after dinner one weeknight in autumn as I toiled that year to write as many as nine 400-word columns a week on top of a fulltime job on a daily paper.
The demanding regimen required me to dig deeply into my professional fortitude because journalism demands the same attention to every detail, whether for the front page or as a sandwich between the public notices and the personal column.
The "average" user of classified advertising is just as important to me as John Howard would be, if I were to stumble across the notice for his garage sale notice at the Lodge, as is expected at this stage on his retirement rather than on electoral defeat.
MY caller on September 22, 2006, had not seen my published report all those years ago. He had forgotten about my interview and his permission for publication. He tracked me down to ask how I had obtained the details.
"A few days ago an insurance company called me to advise that it was investigating my affairs because they found my name on an obscure website called Classie Corner," he said.
"I have had a look and everything is absolutely correct; it is about my life and it is all true.
"It could have come only from me but I honestly have no memory of talking to you.
"I wanted to find you to make sure you are a real person.
"The insurance company has made an appointment to come and see me.
"It doesn’t worry me because I have done nothing wrong and I have nothing to fear.
"They seem to think I could still be doing what the article said I was doing at the time but I’m not and it’s easy to prove that to them."
THE introduction to the post of the original column on this website clearly stated that it had come from my archives in a certain year.
Although I was pleased at the confirmation of my accuracy when working under pressure in the past, a nasty little barb was waiting on my return to the blog intro, which included a slight hiccup that did not affect the meaning of the text. But all that’s just detail.
A MENTION of your name on an obscure website in the conglomeration of avenues in this vast network is enough excuse for an official investigation into your affairs.
Many eyes must watch as fingers that itch for control punch your name into the search engines. It is as scary as anything Orwell dished up and probably with enough foreboding to turn many off the internet, or even against talking to journalists who call for whatever reason.
We can only hope that the balance comes through the freedom of expression and enrichment to our cultural lives and knowledge.
The exposure may be frightening so again I must thank the many hundreds who have shared with me their thoughts and dreams during my travels on the highways and byways of the marvellous community of classified advertising.
Decent people have trusted me with facts about their lives and I have always had in mind the code of ethics from the fraternity of journalists in the AJA.
Critics of the profession often reach for the baseball bat over the principle of journalists policing journalists but the code is embodied in the rules. Breaches are subject to disciplinary action.
FEAR of discipline, however, is not the reason journalists overwhelmingly stick to the code. Rather, they respect the principles of fairness and the public’s right to know.
Those principles now motivate me to reaffirm my mission to record things that would not be recorded.
I do this, not for the sake of feeding details in front of prying eyes but because it is my art and science to inform and entertain.
Like the subject of my column from the past, we must react with humour toward the risk of someone prospecting our soil and sifting for soft and sticky nuggets:
"I have done nothing wrong and I have nothing to fear."
THE prospectors may squeeze their grubby little fists on their prizes and bask in the perfume of their finds but sometimes it may be difficult for the innocent to prove their case and walk free from the spreading stench.
Posted by John Rumney at 5:49 pm