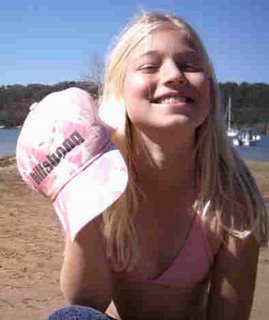 Look closely at the hat this pretty girl holds beside beautiful Moreton Bay, the shimmering entry statement to the new force in the Australian economy, south-east Queensland.
The picture is just one of those family snaps, and certainly not a surfwear PR shot.
There’s no denying, a clothing item with the name, Billabong, certainly makes Aussie kids smile.
The magical nine letters seem to pop up everywhere, even in the marvellous community of classified advertising.
Today’s post is the penultimate Classie Corner "thank god winter’s nearly over" edition before we have a change of season, hopefully with a bit more humour in the column. So stay tuned, but in the meantime I hope you enjoy this story from yesterday's Redland Times.

TWO good reasons are behind Redlands mum Tina Sanders’ appeal for work she can do from home.
They are her daughter, Dakota, who will turn four in October, and son Jett, who is now a terribly demanding two-year-old.
The young pair, like all energetic youngsters, claim a big helping of Mum’s time and energy.
But while many women are keen for any type of work they can balance with the demands of motherhood, Tina, is specific in the call she made through our Classifieds.
Dakota and Jett must be among the best dressed tots in their home suburb of Thornlands.
Any child would be proud to tell their mates, "My Mum made this for me, she used to work for Billabong and Cobra Clothing."
Tina, who grew up in the Currumbin-Palm Beach-Elanora district, left school during her Year 11 to join surfwear company Billabong, where she worked for 10 years until the late 1990s.
"I was one of the last machinists to be retrenched when the company finally decided to get all its work done overseas," Tina said.
"I finished up at Billabong and a day or so later I started at Cobra, who used to supply Byrning Spears. I was there for two and a half years.
"Just about all the Australian clothing manufacturers eventually have taken their sewing work overseas.
"I have been out of the game for a while now and I want just regular plain sewing work, nothing fancy."
Tina alludes to quality in her advertising, which labels her as a qualified industrial sewing machinist.
She said she had not been particularly good at sewing during her school years.
"My sister-in-law worked at Billabong and was getting good money, so that’s what got me there at first," Tina said.
"I found that I liked the sewing after a lot of casual work in fruit barns, a deli and a newsagency, and other part-time jobs."
Tina moved to Brisbane in 2001 to be with her partner, Nigel, and settled at Thornlands more than two years ago.
Nigel works in the IT industry.
Tina’s precision sewing already features on the soft furnishings of Redlands firm Every’s Curtain Gallery but the machinist still can find more time for the skills she honed under the export-level quality controls.
"I have made a lot of things even flags and I am eager to keep learning," she said.
THANKS for joining me to meet the great people in the marvellous community of classified advertising. Email: fourjays@bigpond.com.
Posted by John Rumney at 9:27 am